PM’s Pick, featuring the multi-award-winning Brian Castro, was another must-attend session. The night before, while dining at Muse, I checked to see whether they had any Castro in their classy little bookshop. They did, including a second-hand copy of his fourth novel, After China. I snapped it up, and as I did, bookseller Dan reminded me that he’s “very literary”. I know, I said! He is also very reclusive, making this a not-to-be missed session. And it was free, my original payment being refunded when they found a sponsor. Woo hoo!

The session was titled PMs Pick in reference to the fact that Castro won the 2018 Prime Minister’s (PM’s) Literary Award for Poetry for his verse novel, Blindness and rage: A phantasmagoria: A novel in thirty-four cantos. Even the title is scary, but Lisa (ANZLitLovers) has tackled it. 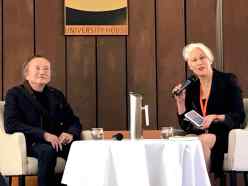 Castro conversed with local ABC radio presenter Genevieve Jacobs. It was a smallish audience, and a quiet conversation, but provided some fascinating insights.

Castro, like Gerald Murnane whom he referenced a couple of times during the conversation, is a self-described recluse. This event is the first he’s done, he said, for three years! I didn’t know that when I booked it, but I’m doubly glad now. The worse thing when he’s writing, he said, is having to be “a social gadfly”, so he hides away, except that he needs to talk to his students at the University of Adelaide where he teaches creative writing.

I’m going to focus on what I learnt about Castro and his ideas (not quite in the order in which the conversation went), and end with a reference to Blindness and rage.

Firstly, why does he live in Adelaide? Hong Kong-born, he has been Australian-based since going to a Sydney boarding school when he was 11 years old. He called himself a fringe-dweller, explaining that he doesn’t, exactly, live in Adelaide but in the Adelaide Hills. Before that, he lived in the Dandenongs on Melbourne’s fringe, and before that in the Blue Mountains just west of Sydney.

He likes the provincial life, which he doesn’t see as negative. It’s also something that Lucien Gracq, his fame-seeking protagonist of Blindness and rage, comes to value.

Then, there’s his job. He teaches creative writing, but he’s not convinced it’s a worthwhile thing to do. (Should I be sharing this?!) Universities, these days, he said, are factories. What do you do with a creative writing degree? Maybe get work in publishing? He has had just two writers win awards over the years he has been teaching. Creative writing has become an industry, but it pays his way, given his novels are not exactly best-sellers!

Indeed, he had quite a bit to say about the writing life, some of it in response to the Q&A, including how tough it was to get that first publisher when he was 32. Winning the Vogel award did it. He has been lucky, he said, and is particularly so now because his publisher, at Giramondo, is also his friend. One of the lessons he has learnt over the years is to accept disappointment! Cheery, eh? His early days were very difficult, because if you want to write, you must invest everything in it. However, reality starts to hit when you start to age, and need to shore up something for retirement. It’s difficult for literary writers in Australia, where returns are small. Only five Australian writers, he said, really live off their writing.

Various gems regarding what he likes to write and read came out during the conversation. For example, he thinks we should read for mood not plot. I relate to this, because this is exactly what I most remember about the books I’ve read. I rarely remember the story, or character details, but I remember the tone and/or how the book made me feel. He’s also most interested in metre and rhythm, which makes sense, because these contribute strongly to mood. He talked about hearing Homer in the original ancient Greek. He didn’t understand it, but the rhythms “electrify the brain even if you don’t understand it”.

So, he “always pays attention to the language first. The plot will come, if it comes.”

Castro described himself as a “short writer”. Long novels don’t appeal to him. He quoted WG Sebald who didn’t like 19th century novels because you could see “the engines grinding” in them! He also said, which won’t surprise you, that he’s not interested in linear narratives, though he recognises there are different tastes and preferences.

Interestingly, for someone seen as a “very literary” writer, he also questioned “grandiose notions of high literature”. He loves works you can read on multiple levels.

Jacobs, of course, asked him about winning the Prime Minister’s Literary Award for Poetry, wondering whether he was surprised. Yes, very – though, when he resisted attending the Awards Ceremony, having previously experienced the bad end of such events, he was told-without-being-told that he should be there! Neither he, nor Gerald Murane, who also won that year (for fiction), wanted to attend.

Regarding winning, it shuts you up for a while he said! He’s having a year off, waiting until he retires. On whether winning has an impact on sales, he simply said his books don’t sell well. His publisher told him he was publishing Blindness and rage for posterity! (Hence Castro working as a professor!)

And regarding the mushrooming of literary awards and whether they support literature, he said Yes and No. Some people can win big money and disappear. However, money does help you buy time, which we’ve heard here before. But then you have get back to the desk. How you high jump that desk is the challenge he said.

The issue of translated fiction also came up. I sensed that Castro (like me) has a love-hate relationship with it. Love, because many of his favourite writers (like Sebald, for example) don’t write in English and he’s not fluent in all the languages of the authors he reads. But hate because he misses “the textures, colours, flavors when read in translation”. Castro said there’s a huge swathe of literary works that haven’t been translated. It came out, in the Q&A, that his novel, After China, had been poorly translated into Chinese, and that they had omitted the first chapter because of the sex!

Now, I should say a little about Blindness and rage. Inspired by Virgil, Dante (the 34 cantos of his Inferno), and Pushkin’s Eugene Onegin, it tells the story of writer Lucien Gracq who, told he is terminally ill, goes to Paris to finish the epic poem he’s writing and to die there. He joins a secret writers’ society, Le club des fugitifs, which only dying writers can join. It publishes an author’s last unfinished work, but not in his/her name. This reflects Castro’s own view that the work is all, the writer doesn’t matter! He doesn’t think fame helps anything.

Castro said that he reads a lot of literary biographies for pleasure, but he inserts writers in the novel to mock. He particularly mocks what he sees as the glorification of French intellectuals, which has been “going on for too long”, he said. Lucien finds them, mostly, arrogant and dismissive. Jacobs commented on the many allusions in the book, and asked whether he expects us to leave the written page? No, he doesn’t expect us to go read the authors, but, he’s a “fictioneer”, and doesn’t mind if people check Wikipedia’! (Harumph!)

The novel chronicles Lucien’s gradual recognition of what’s real in life, from his initial desire to seek something “vainglorious”. It does this, I gather, with a good deal of irony and humour, undermining, along the way, various literary traditions and assumptions.

I haven’t read Blindness and rage yet, but I’m now intrigued. Anything that looks at the lives of writers/artists – that questions who they are, what they are about – intrigues me, particularly when in the hands of someone as clearly provocative as Castro. And as humorous! Castro said he didn’t set out to be humorous but the PM judges noted it, and he admitted that gravity needs a touch of lightness. Jacobs suggested that the undercutting of seriousness, such as can be found in the book, is very Australian. Castro seemed to accept that, but added “also democratic”!

It may be a fact that
if you’re dying of thirst
in the desert
you do not call for whisky
and all you want is water
which may drown you
in full irony.

Canto XXXI has a verse which starts “To be able to write is not to say anything/but to put small things together”, which do, in the end, I’m sure, say something!

There’s not a lot to share from the Q&A, besides what I’ve included above. One struggling writer of science fiction asked about finding publishers and agents, which didn’t feel quite appropriate for the forum.

Another asked – and this made me smile – how she could find a copy of After China! Luckily, Castro was able to say that Wakefield Press is republishing it. And another asked whether he would consider doing a reading (for audiobooks) of Blindness and rage, like Seamus Heaney did for Beowulf. Castro seemed intrigued and not totally negative about the idea.

The session ended as quietly as it started, but I left feeling glad I’d spent time with such a writer, and wanting to read Blindness and rage.