Well folks, finally we have another writers festival here in Canberra. From 1983 to 2001, we had something called the Word Festival (though its name varied a little over the time). Since then, to the best of my knowledge, we’ve only had the one-off Canberra Readers’ Festival (on which I posted) in 2012, so it was a thrill to hear many months ago that a Writers Festival was once again in the offing – and now it is here. I do hope there are plans for it to continue. If today’s buzz is evidence of success then I hope the organisers are feeling positive about future events.

However, here’s the thing. This year has been a topsy-turvy one for me, so I didn’t book a season ticket, and missed out on a couple of events that I would like to have attended, but that’s no biggie. I’ve booked some appealing events and look forward to those. Today, though, due to other commitments, I decided to just attend a couple of free afternoon events (so I missed, for example, Anne Summers). Oh well, I can’t do everything, and I know that whatever I choose to do I will enjoy. I’m easy that way!

I’ve written about Carmel Bird and Marion Halligan before, when Bird launched Halligan’s Goodbye sweetheart. I realised then, and it was clear again today, that they are good friends. So when they launch each other’s books which they’ve done for each other a couple of times now, there’s no formality or stiffness, and they almost make it up as they go, making for a delightfully relaxed but nonetheless meaningful launch.

And so the launch proceeded, with a couple of expressive readings by Bird, and engaging repartee between Bird and Halligan about Bird’s love of words and the naming of characters; her inspiration for the novel (which was seeing an Edwardian hearse on a country road in Victoria); and death, sex and butterflies, and whether the novel’s butterflies are a trope or a motif! I’m not a creative writing specialist, said Bird airily, passing off this issue! Fair enough. Leave that to the reviewers!

There was a lot more, but what I mainly wanted to share was Bird’s statement that she is always “looking for virtue” in her novels. That made us all sit up. Novels, she said, always explore evil, because evil is more interesting than goodness, but the end point of it all is always “where is the good, where is the hope?” An audience question had her clarify this a little further by saying this hope could for things like goodness, reason, happiness, beauty. I immediately thought of those grim, depressing books that many readers feel have none of this, like, for example, Charlotte Wood’s The natural way of things (my review) – and the fact that in most of those books I do usually find a hint of hope. I can’t help thinking that most writers are like Bird, that is, that they want to end with some little bit of positivity, even when they also want us to remember the serious issue they are exploring.

Nicholas Hasluck’s The Bradshaw case (launched by himself) 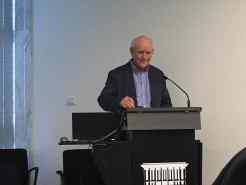 A completely different kettle of fish was the launch of Nicholas Hasluck’s The Bradshaw case, partly because he launched it himself and partly because it’s a very different sort of book – a fact-based courtroom drama about contemporary political issues regarding native title.

I haven’t read Hasluck before, though he’s won The Age Book of the Year and been shortlisted twice for the Miles Franklin Award. The packed room for his launch was evidence of his renown I’d say.

Again, I’m not going to going to summarise the whole session. He started by telling us he was launching a “device” called a book, in which thoughts and images could be conjured up in your mind from the pages you read. We all liked that, of course.

His book, he said, mixes fact and fiction. It explores, via a court case, some controversial issues about the origin of rock art in the Kimberley and how this plays out in terms of native title. He provided quite a lot of background about the rock art at the centre of this controversy – the Bradshaw images and the Wandjina images – a controversy I’ve come across in some of our outback Australia holidays. Hasluck was inspired to write his novel by the ambiguity surrounding this. But this is not what I want to share here.

What I was particularly interested in was some of his general comments regarding novels and history. Novels, he said, can both cast a light on what happened in the past and on what is said about the past now. They can explore (expose?) contested versions of the past.

Commenting on his use of fiction to tell this story, he said “give a man a mask and he will tell the truth”. I like that – as regular readers here who’ve read me on truth and fiction would expect. He also said that he chose fiction because he’s not an expert in the area and that many specialists have, and are, going the non-fiction path.

Discussing the question of how readers should approach the fact-fiction nexus of historical fiction, he said that the author-reader contract is that readers will assume everything they are told is true. (Note that he didn’t say “factual”). He hopes that people, once intrigued by something they’ve read in fiction, might then question what they’ve read and do their own research. This brought us back to the central controversy about the images, and what this means for indigenous people – and it resulted in his making a statement that, like Bird’s regarding looking for virtue, made me sit up. He said that the odd thing about Australian literature is that novels are not seen as part of current debates, unlike the USA, where works by Gore Vidal and Thomas Wolfe (Bonfire of the vanities), for example, do enter such debates. Australians, he said, see fiction as something quite separate. I’d love to know what others think about this claim – but for me, again, it made me think of Charlotte Wood’s The natural way of things and the contribution she clearly wanted to make to the misogyny debate.

The issue we didn’t really discuss, though it was touched on, concerns indigenous Austrlians’ reaction to this story being told this way by a non-indigenous writer. All Hasluck said on this point was that his book is about “cultural integrity”. It will be interesting to see.

STOP PRESS: AS Patric’s debut novel Black rock white city has just been announced the winner of the Miles Franklin Literary Award. Congratulations to him! Another book for the TBR!