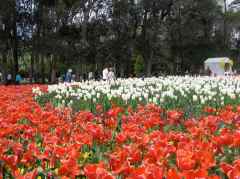 Small corner of Floriade 2011: tulips among the gum trees

You could all be looking at tulips …

said Kate Grenville, the first speaker at today’s Canberra Readers’ Festival. She was referring to Floriade, Canberra‘s popular, crowd-drawing annual spring festival, and the fact that today was a glorious day. Just right, in fact, for tiptoeing through the festival’s stunning tulip beds. But instead, we keen readers were in the Playhouse listening to our favourite authors talk about writing and  reading. After all, like Scarlett O’Hara, we all knew that “tomorrow is another day”!

After a generous welcome to country by the local representative of Australia’s original story-tellers, Ngunnawal elder Aunty Agnes Shea, Kate Grenville took the floor – and presented a passionate argument for the importance of capturing and keeping stories. She blessed her mother for insisting on repeating the family stories that eventually inspired her to research and write The secret river – and thence The lieutenant and Sarah Thornhill. She read excerpts from stories written by the 97-year-old John Mackie, and argued that “you can’t make up” the experiences of people from the past, that only by reading what they felt and experienced can you manage to turn them into convincing fiction. Sure, you can do research, she said, but you don’t know what to research if you don’t have the stories to guide you. She wouldn’t have known, for example, to research “a scuffler” if Mackie hadn’t written about one.

Grenville concluded by quoting Australian poet Dame Mary Gilmore who argued for preserving the things of the past. Gilmore wanted to write about people, not events; she wanted to show “not the miles walked but the feet that walked them”.

What an inspiring and entertaining speaker. Heiss commenced by describing what inspired her to write: she was on an international plane flight and overhead a passenger, whose neighbour had said he’d met “a fourth generation Australian”, responding with “you can’t get any more Australian than that!” This interchange showed Heiss that Aboriginal Australians did not appear on “Australia’s identity radar” and she set about correcting that gap in our awareness. Being tertiary educated, Heiss says she’s in the top 1% of the bottom 2.5% of Australians and consequently believes she has a responsibility to “voice our truths”, to show the commonalities as well as the differences in the lives of indigenous and non-indigenous Australians. She clearly takes this responsibility seriously and has published a significant body of work, encompassing children’s and adult fiction and non-fiction.

Heiss was very clear about wanting to provide a resource for people to understand indigenous experience and identity in Australia. What’s good about fiction she said, is “you can create the world you want to live in”. Having not yet read Heiss, I bought one of her books!

Session 2b: Melina Marchetta: The role of travel in establishing setting

Marchetta’s talk was a more practical one about how she needs to visualise a place before she can describe it. I found this intriguing, particularly as she was talking about her Lumatere fantasy series. She needs to travel to see real places that she’ll describe in fantasy? You can tell I’m not a fantasy reader! It all made sense though when she showed photographs from her travels in France, Turkey, and so on, and read excerpts from her books to show how she used her knowledge of places like the rock villages in France to create her fantasy mediaeval world. She, a little sheepishly, read one excerpt which contained quite a bit of geological data, telling us that the general rule is that your reader should not see your research, but in this case she felt it was justified.

Self-described author-preneur (and hippopotamus lady*), Hazel Edwards took us on a lively ride through her writing life, which spans multiple forms and approaches from children’s picture-books to adult non-fiction, from writing on her own to collaborative writing. She loosely structured her talk using the letters from ANECDULTERY – as in A for Anecdote, E for e-Books, N for Non-boring, L for Literary Terrorism, and so on, ending in Y for Why! Her talk was full of the wisdom of an experienced writer, delivered with warmth, confidence and humour. She had some great turns of phrase. For example, she told us that her initial reaction to one research subject was that he’d suffered “a charisma bypass” but she grew to love him. She defined history as “high gossip not boring facts”. Edwards believes research is critical, stating that if “you don’t get something right, your reader is no longer going to trust you”.

She said her most significant book is the coming-of-age novel, f2m: the boy within, about a young woman who transitions to being a man. She co-wrote this, using email and skype, with the New Zealand-based ftm writer, Ryan Kennedy.

Session 3b: Kel Robertson: In defence of (trying desperately to be) popular fiction

Kel Robertson? Who is Kel Robertson? Well, I’m embarrassed to say that he’s a local writer who shared the 2009 Ned Kelly Award for Best (Crime) Fiction with Peter Corris for his latest novel, Smoke and mirrors. This same book also won the ACT section of the National Year of Reading competition which is why, he said, it was he addressing us and not one of Canberra’s other writers.

Robertson was in turn entertaining, realistic and provocative about the role of so-called popular, or accessible, fiction – what he calls “entertainments” – in the reading firmament. He told us that it is the popular writers – the Matthew Reillys, for example – who make it possible for publishers to take a risk on new writers, who pay the bills of literary fiction. Having made this point, he then went on to argue that a good reading diet needs its fast food as well as muesli in order to “feed the intellect and satisfy the hunger for diversion”. Many readers, he believes, move to and fro between simple and complex reads. He said that when he is feeling down he grabs “something that is accessible to nourish my psyche” and that he’d like to see a correlation done between “light recreational reading” and “the happiness index”. I’d like to think he has a point … wouldn’t it be good if books could take the place of prozac! I bought Smoke and mirrors for Mr Gums and may, you never know, dip into it myself.

Frank Moorhouse** is one of the grand old men of Australian literature, best known for his Edith trilogy. The third in this series, Cold light, recently won the Queensland Literary Award for fiction, which he described as “now probably the most noble prize to win because it’s the citizens’ prize, not the Premier’s prize”. Moorhouse didn’t fully speak to the announced topic of his talk – Memoir Writing – but ranged over a variety of issues to do with contemporary reading and culture. He argued that diaries, books on how to garden, weave and so on, make important contributions to culture, to documenting how we live and to shaping an Australian aesthetic. Some of these books, he argued, are written with flair and can survive into the future just as have, say, Samuel Pepys‘ Diary and Izaak Walton’s The compleat angler (1653). He spoke of the relatively recent rise of literary (readers’) festivals and author events, suggesting that they demonstrate a recognition of the importance of the arts in contemporary Australia. He teased out some of the implications of the e-revolution in books, saying, perhaps a little tongue-in-cheek, that e-books make lending books a little harder and “that’s good for writers”.

Moorhouse is not, I’m pleased to say, a grumpy old man. He sees the internet as a positive thing which encourages writing.  He is a judge of a major short story competition in Australia and said that the number of entries is increasing as is the quality of the writing. Wow! He concluded with Samuel Johnson’s statement that writing and reading help us endure life***.

While I’d like to think they help us do more than “endure”, this seemed a good note on which the Festival could end, and end at this point it did. I do hope this Festival – beautifully emceed by Louise Maher – becomes a permanent part of Canberra’s cultural calendar.

* Edwards wrote the hugely popular children’s picture book, There’s a hippopotamus on our roof eating cake.
** Bryce Courtenay was the originally listed author for Session 4 but clearly withdrew after his announcement that he has been diagnosed with terminal cancer.
*** The actual quote is, I think, “The only end of writing is to enable the readers better to enjoy life, or better to endure it.” That sounds more like it.

33 thoughts on “Canberra Readers’ Festival 2012: For the love of reading”