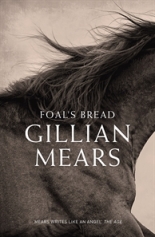 Foal’s bread is Gillian Mears’ first novel in around 16 years, though she has published short stories in the interim. This is a shame because she is a beautiful writer, particularly when she writes about the place she knows best, the farms of the New South Wales north coast.

Foal’s bread is about the Nancarrow family. Most of it takes place between 1926 and around 1950, as it follows the fortunes of Noah (Noey/Noh), her husband Roley (Rowley), and the extended family with which they live. Their main business is dairying, but their passion is the sport of horse high jumping. At the beginning of the novel, Roley is an Australian high jump champion and Noey a young 14 year-old girl with promise. They meet, marry (early in the novel, so no spoilers here) and start working hard to achieve their dream of having their own high jumping team. Hope on, Hope ever, is their motto. That’s the broad plot; the story is far more complex.

This is an archetypal story of strong country people coping (or not) with “luckiness and unluckiness” in life. In its depiction of hardship, stoicism and the will to survive in rural families, it reminded me – in tone if not in story – of Geoff Page’s The scarring. The hardship may come from different quarters, but in both there is a sense of forces out of one’s control combining with things of the characters’ own making. That mix – of characters’ judgement or behaviour clashing with luck (usually bad) – tends to make for a good story, in the right hands. It’s a bit Shakespearean in a way, the clash of character with “the elements”.

In Foal’s bread, the “bad luck” has many sources, some human and some natural, such as incest, lightning strikes, giving birth to a disabled child, war and drought. How the characters cope with the trials confronting them is the core of the novel. Unfortunately, more often than not, they don’t cope very well. Why? Mainly due to their very human failings. Noey and Roley, whose marriage commences with great love and big dreams, don’t know how to communicate when calamity hits. Noey’s mother-in-law, Minna, lets her jealousy (“of the happiness she’d never seen before”) get the better of her and prefers to increase the tension between her son and his wife rather than to ameliorate it.

By now you’ll be thinking this sounds like a miserable story, and in some ways it is. But it’s not all darkness. While the novel has an almost elegiac tone, its movement is towards light. It has a three-part structure. There’s a very short Preamble which sets a tone of harshness and brutality with its references to incest, bushfires, floods, and animal cruelty.”Watch out you don’t cry” we are warned. Then there is the bulk of the novel in which the story of Noey and Roley is played out. This is followed by a Coda, set some 50 years later, in which we learn that “the old voices remain … funny, flinty, relentless”. These voices are carried into the future by Lainey, the strong, resourceful daughter of Roley and Noey, “her mother’s daughter through and through”.

A strong story, but what gives this novel its real power is the writing. Mears mixes the rough, ungrammatical country-speak of the era with glorious, rhythmical language describing the magpies, butcherbirds, trees, creeks and hills of One Tree Farm. The “one tree” is a jacaranda, and it features throughout the novel. It could almost be, dare I say it, a character. Early in the novel, when all is full of hope, it quivers “to create the feeling of a big bosomed woman wanting to waltz”. Later, as things start to collapse, it loses its leaves, but at the end “the old tree lives on … like a huge purple cloud hiding the rooflines”.

And then, of course, there are the horses. Reading this book reminded me a little of reading Tim Winton’s Breath. Mears does for horse high-jumping what Winton did for surfing. She made me feel the joy and beauty of the jump, of pushing oneself to achieve just that little bit more in a risky sport, of having a dream that keeps you going, of doing “the impossible”. Mears, like Winton, knows her subject inside out, and you feel it in her writing.

I fear I haven’t done the book justice. I’ve not really described its complex plot. I’ve named only a few of its large cast of colourful characters. It’s an ambitious book with big themes and a big style. Not everyone loves it. Some find the dialogue tricky or some descriptions overdone; some think the ending is disappointing; some think it’s stereotypical in places. I think none of these things. I’d love to know what you – if you’ve read it – think!