I can’t believe how long it’s been since I’ve posted on a Library of America (LOA) Story of the Week. I usually “do” a few a year, but this is the first for 2019, even though I’ve identified several that I’ve wanted to do. However, when Lafcadio Hearn popped up last week – and with a Japanese story – I knew I really had to break the drought. 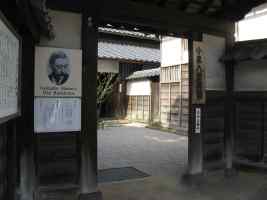 Lafcadio Hearn (1850-1904) has appeared in this blog a couple of times before, the main time being in a Literary Road post from our 2011 trip to Japan when we visited Matsue. Hearn only lived there briefly but he met his Japanese wife there and it has a museum dedicated to him. Hearn is a fascinating man. Greek-born to a Greek mother and Irish father, he spent childhood years in Ireland before moving to the USA in 1869, where he then lived for two decades. Here he married a former slave who worked in his boardinghouse kitchen, and built his career as a journalist. In 1890 he went to Japan on a publisher’s commission. He married again, and lived out the rest of his life here, taking the name of Koizumi Yakumo. He became chair of English Language and Literature at the Tokyo Imperial University.

In their usual introduction, the Library of America quotes an article by another writer who appeared here only recently, Roger Pulvers. The article, in Japan Times, is titled “Lafcadio Hearn: ‘Japanese thru and tru'”. Pulvers provides a thoughtful, clear-eyed run-down of Hearn’s life, of his attitude to Japan, and particularly of his achievements as a writer. He says that Hearn:

was the shadow-maker, the illusionist who conjured up his own visions of Japan and gladly lost himself in them. He strove to leave Japan and return to the United States. Perhaps he realized that it was there that he had created his most accomplished work, attaining something he savored: notoriety. Again an ironical paradox emerges: He is remembered now in United States, if at all, not for his superb reportage on modern America but for his adoration of a long-gone Japan.

He worshipped the static and wanted to see his beloved quaint Japan remain as sweet as it always was in his eye and the eyes of the world, bemoaning all progress: “What, what can come out of all this artificial fluidity!”

loathed the modern Japanese male and what he stood for, and in this he recognized the futility of his task, a futility keenly felt toward the end of his years, where he heard “nothing but soldiers and the noise of bugles”.

Remember, when he died in 1904, Japan’s imperialism was at its height.

Hearn published roughly a book a year for the fourteen years he lived in Japan, but is best known for two of them, Kwaidan: Stories and studies of strange things (from which this post’s story comes) and Japan: An attempt at interpretation. Kwaidan comprises a number of ghost stories plus a non-fiction study of insects. Intriguing, eh?

Yuki-Onna, says the Library of America, means “snow woman”, and is “an ancient spirit who appears often in Japanese fiction, plays, and movies”. Hearn explains in the Introduction to Kwaidan that he’d heard this story from a farmer as a legend from his village. He says that he doesn’t know “whether it has ever been written in Japanese” but that “the extraordinary belief which it records used certainly to exist in most parts of Japan, and in many curious forms.” Wikipedia confirms in an article about this spirit that it dates back to the 14th to 16th centuries, and can be found in many Japanese prefectures including Aomori, Yamagata, Iwate, Fukushima, Niigata, Nagano, Wakayama, Ehime. If you know your Japan, you’ll know that these take us from northern Honshu down through the island and across to Shikoku.

The story is pretty simple, plot-wise, and given it’s just 4 pages long I’m not going to describe it here, except to say that it is about a vengeful snow spirit. Why she is vengeful is not made clear in Hearn’s story, but Wikipedia says that some legends believe she is the spirit of someone who perished in the snow. The legends vary over place and time, particularly in terms of how evil or aggressive she is.

I suggest you read it at the link below, as it will only take a few minutes. Meanwhile, I’m glad to have had this opportunity to remind myself of this intriguing 19th century character. Next, I’d love to read some of those American articles of his that Pulvers praises.