Who could resist a conversation involving Australian journalist, author and academic, Stan Grant? Not many, it seems, which is why this ANU/The Canberra Times conversation event was held in a bigger venue than usual, Llewellyn Hall, and just as well, because the audience was indeed bigger than usual. Such is the drawcard of Stan Grant – whose Talking to my country I reviewed in 2017.

This conversation, with Australian journalist and academic Mark Kenny, coincided with the publication of Grant’s new book Australia Day and his essay On identity.

After MC Colin Steele did the usual introductions, Kenny took over, introducing himself and Grant, whom he called an “all-round truth-seeker”. Grant is an articulate, confident, erudite speaker who peppers his arguments with the ideas of many writers and philosophers. There’s no way – my not being a short-hand trained journalist – that I could record all that he said, so I’m going to focus on a few salient points, and let you read the books or research Grant for more!

Grant’s analysis of the current “identity” situation made complete sense to Mr Gums and me. He said, essentially, that identity (of whatever sort) is problematic when it becomes exclusive, when it reduces us to those things that define a particular identity and intrudes on our common humanity. At its worst it can trap us into a toxicity which pits us against each other. This sort of identity can make the world “flammable”.

This is a tricky one, and I could very well be layering my own values and preferences onto it, but I think Grant aligns himself with people like Desmond Tutu for whom forgiveness, leading to a “higher” peace, was the real goal rather than justice, per se. (It’s all about definitions though isn’t it?) It’s one thing, Grant suggested, to feel righteous indignation, but quite another to desire vengeance. Grant talked about inhaling oxygen into the blood, not the poison of resentment.

The strongest message of the conversation, as I heard it anyhow, concerned Grant’s belief in the fundamental value of liberal democracy as the best system we have for organising ourselves, albeit he recognises that it’s currently under threat (and not just in Australia). In supporting liberal democracy, which came out of the Enlightenment, Grant does not minimise the hurts and losses of indigenous Australians under this system. However, he argues there are solutions within its tenets. I hope I don’t sound simplistic when I say that I found this both reassuring (because I sometimes wonder about our democracy) and encouraging (because it was good to hear some articulate so clearly why he believes liberal democracy has got what we need).

His aim in this latest book of his, Australia Day, was, he said, not to look at indigenous issues in isolation but within a broader context. The conversation spent quite a bit of time teasing out what this actually meant.

Grant made a few clear points: 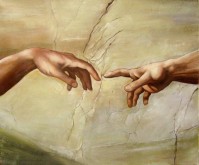 A key question he said is whether a liberal democracy can deliver on its promises. Among the many philosophers he referenced was Hegel whose idea of “becoming” Grant likes. He talked about Michelangelo’s painting of The creation of Adam on the Sistine Chapel, and the fact that the fingers don’t meet. We all live in this space, he said. It’s a powerful image. He believes that “unfettered liberalism can erode community”, and that liberalism is currently failing to deal with fruits of its own success. It works well in an homogenous state, but most states are not homogenous. Resolving this is modern liberalism’s challenge.

I have heard Grant on this before, but I enjoyed hearing it teased out more in this forum. On January 26, 1788, the idea of the Australian nation was planted, and this idea encompassed the ideas of the Enlightenment (albeit, he admitted when question by Kenny, the colony didn’t look much like it in those early days). This day, he says, holds all that we are and all that we are not. It also means something for all of us, indigenous and non-indigenous. For him, the day is about considering, recognising, exploring who we are.

He argues that changing this date would hand January 26 over to white nationalists, but he applauds that the change-the-date campaign has ensured that no-one can now come to the day without knowing the issue, without knowing the angst it encompasses. Indigenous people have changed how we see this day, and we all share deeply that first injustice.

He then asserted that our right to protest that day is a rare thing – and it’s because we are a liberal democracy. Grant argued that antagonism is the life blood of the nation, that being free “to antagonise” is the fundamental principle of liberal democracy. The challenge is to hold these antagonisms in balance.

Considering how the current impasse could be resolved, he talked about ways that the day could be imbued with new significance: wouldn’t it be good if a treaty were signed on this date, or that Australia became a republic?

Returning to the idea of identity, he believes the problem is that we think first about identity rather than policy, but, he argued, powerful communities will always look after identity. What we need is good policy to fix our socio-economic burdens. And that, on this Australian election day, seems a good place to end!

26 thoughts on “Stan Grant in conversation with Mark Kenny”