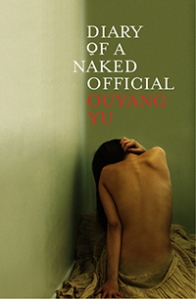 Where to start? Perhaps with the title. Not being an expert on Chinese culture, I wouldn’t have fully understood the title if it hadn’t been for the back cover. It explains that “naked official” is a recognised term in China describing men who locate their wives and children overseas, where they also deposit all their money. The men remain in China “naked” and, in this case at least, “totally free” to indulge in whatever they desire – which brings me to the subject matter of this novel …

The main part of the novel comprises diary entries written by our naked official (who may be named Shi Ma and so that’s what I’ll call him) over a period of three months*. In it he details a life driven by satisfying carnal pleasures with no desire (ha) to rein them in. He is so focused on “enjoying” other women – young, beautiful ones – through pretty much any act you could imagine and then some, that he has no time or energy for intimacy with his wife, who does not move to Australia until halfway through the novel. “Sex”, he says early in his diary, is “a keyword of our times, it is like a poisoned liquid that seeps into the minds of everyone, including women”. (Including women, eh! How gender plays out in the novel, in fact, could occupy a whole post).

Framing the diary is the encompassing conceit that the story is presented to us by a writer, who is probably Chinese-Australian and who had found the diary on a USB stick left on a Melbourne train. He decides to present it in its entirety “with a bit of editing here and there, just to make it less offensive to the middle-class sensitivities in this country”. He warns his readers, just as I have, to be prepared for an assault on their “moral values”.

As you have probably gathered by now, this is a clever, complex and rather slippery book. I say slippery because it looks like it’s a critique (or satire) of modern China, of a world where obsession with sex and fast adoption of capitalism collide, and where increasing independence for women sees “concubine” become “working girl” with different expectations. But, when you comprehend that the character “publishing” this diary is based in Australia – and that writer-translator Ouyang Yu spends his life between Australia and China – you see that this is no simple tale. This is not to suggest that the book is autobiographical but rather that, through these layers, Yu plays with our minds, and forces us to recognise that Australia and China have more in common than we may think.

The layers are complicated further by the fact that Shi Ma himself works in a publishing house. His job is to recommend works to his boss, B, for publication. B, though, rarely agrees with him. Our narrator says:

But it is books that speak the honest truth to a hurting degree that are denied the chance of publication because the comfort zone is outstepped and our core values are challenged.

might be considered for publication if not recommended outright. In today’s China, things are much more confronting, and much more physically permissive than a decade or so back as it is good for the economy … Still, I am not sure because B may object on the basis of market and censorship.

Censorship in China is one issue, but western readers are only too aware that publishing in so-called “free” countries is by no means free of the impact of the market. Shi Ma is pretty devastating in his comment on publishing:

In the scheme of things, an excellent book, by the time it is edited and published, becomes a good book, and a good book, a so-so book. It is amazing how a so-so book can sell, such as the one penned by the guy called Hung Heavens, but I have ceased to be amazed by the mediocrities as the world is made for them, books written by the mediocre for the mediocre, like common food, eaten only to be shat.

In another interesting layer, Shi Ma is given the job of assessing applications for “self-funded poetry”. Ouyang Yu, himself, is a poet and clearly knows only too well how difficult it is to get poetry published.

I have, I know, digressed somewhat, because the examination of publishing is only one aspect of this novel, and I probably haven’t given you much sense of its actual narrative. The novel does have a story, albeit a flimsy one based around sexual exploits. There are recurring characters, including the aforementioned B, a mother and daughter with whom Shi Ma has a complicated relationship, his friend Sam, and various working girls. However, while Shi Ma, himself, does develop to some degree – becoming “absolutely bored with a multitudinous accumulation of bodies” – none of the other characters are “developed” or even “rounded” in the usual way of fiction, because this is not a traditional novel. It is, rather, what I’d call an “ideas novel” that explores not only what is happening in modern China but also, more generally, what a sex-focussed, market-driven world looks like. And it ain’t pretty. Human relationships and original artistic expression are measured by money, and such values as love and morality are degraded in the wake.

Diary of a naked official is a book that shocks and appalls, but that can also surprise and even make us laugh. In it, Ouyang Yu, unlike B, is not afraid to expose “the night in our hearts”. Shi Ma is not a sympathetic character and yet, at times, he makes sense. There are no easy answers, and this book certainly doesn’t provide any. It does, however, ask some very pointed questions.

* In an interview I heard with Ouyang Yu, he pointed out that the diary starts on 4 June (the Tiananmen Square date) and ends on 11 September (9-11 in other words). More layers, you see …

18 thoughts on “Ouyang Yu, Diary of a naked official (Review)”