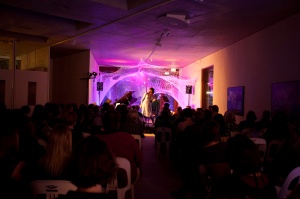 As we were driving home from Woven Words, the most recent event associated with The invisible thread anthology, it occurred to me that the evening, which blended words with music, was rather like a three movement musical composition. It went a bit like this:

The event took place in an intimate venue in Canberra’s newest inner city precinct, New Acton, which, I understand, is positioning itself as an arts hub. Even before a fire in mid-2011 set the area back, there had been some lovely musical evenings in Flint, one of the precinct’s restaurants. The Nishi Gallery, though, is a very recent player on the block, so recent that I’m not quite sure what its long-term plans are. Last night, however, it became a delightful space in which a gathering of, guessing here, about 100 people heard three great authors read from their works, bookended by music (mostly) chosen by them and performed by local professional musicians. It was, in a word, a blast.

After some pre-show piano music performed by Adam Cook, Allegro started with the gorgeous Chanel Cole singing Kurt Weil’s “Speak Low” accompanied by Cook. Sara Dowse chose this because it was the theme song of Ava Gardner‘s film, One Touch of Venus, which is the title of Dowse’s piece in The invisible thread. In it she describes a weekend she spent with Ava Gardner when she was 7 and Gardner about 24. An unusual choice perhaps for a Canberra anthology, but the anthology isn’t solely about Canberra. Dowse’s piece is about those moments in your life in which you learn something precious and lasting. Her time with Gardner provided one of those moments for her. Her movement finished with another jazz piece performed by Cole and Cook, “Old Devil Moon”.

At question time I asked her how someone with such strong creative drive – she sings, writes and paints – ended up working in bureaucracy. She was, for those who don’t know, the first head of the Office of Women’s Affairs which was established by our new reformist Prime Minister, Gough Whitlam, in 1972. Her answer was perfect: They were very creative times, she said.  Can’t argue with that. They were.

After a short break, it was time for Adagio, my least favourite movement when I was a young music-lover. I was impatient, wanted something faster, with more beat. Now, though, I’ve learnt to enjoy and love the slow and the opportunity it provides to dwell. Tonight’s Adagio provided exactly that … It was bookended by Adam Cook playing the “City of Carcosa” by Larry Sitsky and the CSO (Canberra Symphony Orchestra) String Quartet playing Samuel Barber’s elegaic “Adagio”. Alex Miller has a love-hate relationship with Canberra, mostly the latter it seems! He earned a polite but forgiving (I think) hiss from the audience when he said that no-one chooses to live in Canberra. Wrong! However, he also said that he felt privileged to be involved in the event.

Miller suggested that writers would like to write music, that music manages to express something that writers never quite achieve. Now that’s something for us to ponder. Has it to do with music being the universal language I wonder? Would all writers agree? He talked about writing – about the importance of voice, about the imagination and the act of “imagining something into being”. How to write his novel, The sitters, from which he read, came while he was sleeping on a plane flight between Los Angeles and Sydney. It is about a portrait artist, and explores the nature of “art” and the relationship between artist and subject. The reading ended on:

It’s a story not an explanation.

I like that … it sounds simple but packs a lot.

The final movement, Scherzo, belonged to poet-novelist Alan Gould. It started with CSO String Quartet performing Percy Grainger’s “Molly on the Shore”. I noticed Gould’s head, up front, bopping away just like mine. Gould read several poems starting with “The Roof Tilers” which I mentioned in a recent Monday Musings. I love that poem. Gould was an engaging reader, introducing each poem with some background. He read his most recent poem “A Rhapsody for Kenneth Slessor” and “Sea Ballad“. And concluded with two flamenco inspired poems, first describing the challenge of replicating in poetry a flamenco rhythm. He read “Flamenco Rehearsal” and “Flamenco Pair”, at times toe-tapping the rhythm as he went. Appropriately, Gould’s movement ended with guitarist Campbell Diamond performing two Spanish pieces, “Junto al Generalife” by Joaquín Rodrigo and (appropriately) “Finale” by Antonio José.

When asked, at the end, whether a sense of dislocation was important to being an artist, Gould, also a model shipmaker, said that for him it was more a sense of being “oceanic” which he described as “being at home in the unstable element”. That may be why I’m a reader not a writer!

The evening was beautifully em-ceed by ABC 666 Radio announcer, Genevieve Jacobs. She was a charming presenter who engaged well with each writer. And she managed her high heels on the tiny stage with great courage!

The evening had a few little challenges. The microphones did not properly work for the singer who opened the evening, the seats were a little hard after three hours, and the venue has just one all-purpose toilet. These were minor. Far more important was the wine! As an Anything-But-Reisling girl, I do hope a choice of white wine is offered next time …

Seriously though, it was a delightful evening. The writers were generous, the musicians superb. Irma Gold, editor of The invisible thread, is doing a stunning job of exploring and exposing the invisible threads that connect the anthology to other arts, to readers, to Canberra. It’s exciting to be part of it.

POSTSCRIPT: With thanks to Dave, of NewActon.Com, for the images.