… while spring may be a welcome sight, for some strange reasons, I miss winter’s snow. (not the temp. just the beautiful snow scenes).

Would I miss winter and snow? Not on your nelly! Meanwhile, Nigel Featherstone (Under the counter or a flutter in the dovecot) wrote in response my comment on a recent post of his:

As to the drive to and from Canberra: most of my trips are through Lake Bathurst; so amazing – all that sky!

But arriving in the ACT is always a good feeling. Though almost immediately I miss my home town. 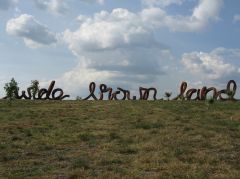 These comments got me to thinking about my sense of place – and then about place in literature. First me. My love of the Australian landscape came home to me when we returned in 1985 from a two-year posting in Virginia, USA. Like most Aussies, I’d read a lot of fiction from the northern hemisphere and had somehow been imbued with the idea that the loveliest landscape is lush and green and the best houses are two-storey. After enjoying two years in such a place, I wondered how I’d feel about returning home. I needn’t have worried. We drove back into my city and it felt wonderful. I knew then that here, this  browner place with its scraggly vegetation, was my place.

Now for literature. I can think of two main uses of place in literature. One is the obvious one, place as setting, as background for the action. I enjoy reading good descriptions of place, and have shared some in my reviews. My favourite descriptions are sensory, enabling me to “feel” and “see” the place and its impact on the characters. A favourite example is the opening paragraph of Charles Dickens‘ Bleak House. It’s hard to forget London and its fogs after that.

The other use, though, is more complex. It’s to do with our relationship to place – the way we interact with place, the way we feel about it, the way it interacts with us.

But here’s the rub. Relationship to place is complicated in colonial/settler societies like ours, societies which have taken over someone else’s place. How do we reconcile that? There’s a fundamental conflict between our two different experiences of place, and it’s discomforting. We want to respect and better understand the original owners’ values while validating our own. Literature (and the arts in general) can help us work through these issues –  by directly exposing and exploring the conflict, and more subtly by sharing our respective experiences. For literature to be effective, of course, we need universal literacy – but that’s another story.

Fortunately, more indigenous writers are being published and we are hearing their voices about land, about country. We need to hear it, we need to share and talk. In That deadman dance, Kim Scott tackles head on the issue of land and ownership, of competing values and different understandings, in the early days of settlement. Killam, the soldier, has to give up to the Governor a place he’d taken:

Mr Killam was learning what it was to have someone move in on what you thought was your very own home. He thought it was the last straw. The very last.

Meanwhile, Skelly tramps about the land with a gun in his hand, explaining:

Well, it’s not our home is it?

And entrepreneur Chaine decides, at one point, to give up his farming goal for whaling:

Whaling was better than attempting to work this land with its topsy-turvy seasons  and poor soil, and there’d be trouble with the natives, farming. The best land was their land, too.

For our indigenous narrator, Bobby, land is something known, felt:

And then Bobby found a sheet of granite, and a small rock hole covered with a thin stone slab and filled with water. He crouched to it, he touched the stone, and sensed home.

In the end, of course, the “settlers” win and we descendants are left with the legacy of loving land that was not ours. Kim Scott has made an intelligent contribution to the conversation about this complex business of land.

Some years before Kim Scott’s book (2011), Andrew McGahan, a non-indigenous writer, wrote The white earth (2004), a contemporary story set on the eve of Native Title. It’s about the love of land, by both indigenous and non-indigenous people, about greed and putting money and land ahead of spiritual and emotional values. It’s a little melodramatic, but it’s a powerful read. The old grazier believes that:

Ownership could not be shared. Not the power of it, not the weight of it either. It could be crushing that weight, encompassing all the history that the land had ever witnessed, the summation of the lives and deaths of all those who had walked it before. But William [his great nephew] barely even knew the station – he hadn’t smelled it or touched it or felt the terrible age in its bones …

The irony is that this is a man who loves his land, but selfishly and greedily. There are indigenous people who own this land and Native Title is being enacted. His daughter says:

This law is brand new, it has to be interpreted by judges. Maybe the Kuran people haven’t kept up their presence, but if they argue that eighty years ago their entire male population was killed off while trying to – then what? What humane person isn’t going to consider that a reasonable excuse, no matter what the letter of the law might say?

This is a complex novel with no easy ending …

And I have ranged far from what inspired me to write this post but it comes down to this: we have a long way to go before we (non-indigenous people) can feel comfortable about our love of our place. We need the arts to help us through it … I suspect Nigel would agree.