Monday Musings’ Guest Post no. 3 comes from Guy Savage of His Futile Preoccupations. Guy started commenting on my blog very early on and endeared himself to me by giving me the nickname of Gummie. That is a very Aussie thing to do – or is it English? Guy, you see, is an expat Brit living in the USA. (At least I think I’ve got that right.) I quickly discovered that Guy had an interest in and knowledge of things culturally Australian and we have shared some interesting conversations about Australian authors and films over many posts here and there. He is also interested in the classics, including authors like, oh, Jane Austen for example. His other interest – he’s a man of many talents – is crime fiction and film noir, and he writes with great flair on things criminal! Do check out his blog. You won’t be disappointed.

But, on with the post. Guy stunned me when, commenting on my very first Monday Musings, he named Max Barry as his favourite Aussie writer. Max Barry, who is he? Well, today Guy is going to tell (me) us … read on … 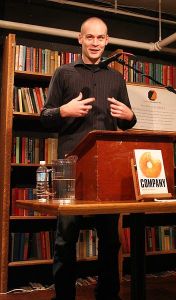 Ok, I’ll admit it. I’m not rational about Max Barry. I’d like to say that I’m his number one fan, but that makes me sound as though I’m ready for psycho-therapy, and anyway, if you make a trip to Max’s website and sign up as a member of Max’s Posse (currently at 5785 and climbing), you’ll see that he’s his own number one fan. So instead I’ll land on the safer statement that I’ve been a fan of this Australian author for 10 years. Born in 1973, Max Barry is a young writer, and there’s going to be a lot of great books coming from his home in Melbourne. I suspect that he’s better known outside of Australia, but I’m basing that on the fact that Gummie hadn’t heard of Max Barry before I mentioned him, and she’s my barometer for all-things-to-do-with-Australian-culture.

Yes it’s been ten years since I first came across Max Barry in 2001 via an out-of-print copy of his first book, Syrup, a brilliantly funny novel which satirizes marketing and consumerism. Actually I’d better back up a bit here–the book, published in 1999, was attributed to Maxx Barry in a continuation of the marketing idea. Max says he added the extra X:

because it seemed like a funny joke about marketing, and I failed to realize everyone would assume I was a pretentious asshole.

Syrup is the story of an unlikely hero, Scat, a marketing graduate from Iowa who moves to L.A. He devises a marketing plan for a new drink called Fukk and plans to sell his idea to Coca-Cola, but before he can seal the $3 million dollar deal, Scat’s roommate, Sneaky Pete, in a wickedly funny backstabbing move of corporate theft, claims the copyright.

Syrup is one of the funniest books I’ve ever read, and when I concluded the novel, I was troubled that I’d found it purely by accident. I took the book’s out-of-print status rather personally, and buying about a dozen copies, I sent them out to anyone who was still speaking to me and urged them to read the book. Without exception, everyone who got one of those copies of Syrup loved the book.

Barry’s second novel appeared in 2003. Jennifer Government is an alternate-reality vision of globalization in which most countries are nakedly dominated by corporations rather than by governments. Corporate employees take the name of the corporation they work for as surnames, and schools are sponsored and controlled by corporations intent on raising the next generation of avid consumers. This is a novel in which corporate competition has become so fierce that consumers become stiffs in a guerilla marketing campaign guaranteed to hype sales of crappy new tennis shoes. Jennifer Government is a remarkably intelligent and prescient novel, for some of the fictional dire social conditions Barry created no longer seem quite so futuristic in the post-boom gloom.

Barry’s 2006 novel Company again placed the individual in the middle of corporate nastiness. This novel, set in Seattle, explores the shady dealings of the Zephyr Holdings Company, and when Stephen Jones from the Training Sales Dept. begins to ask a few awkward questions, he finds himself catapulted into management. In this novel, Barry blends the nonsense rules of corporatism with the naturally absurd results, and consequently, this is a perfect depiction of the insanity of life within the corporate machine.

This year Barry published his fourth novel, Machine Man–the story of corporate scientist Charles Neuman, employee of Better Future, who accidentally loses a leg in an industrial accident. Charles’ discovery that the replacement leg is better than the original sets off a chain of events in which Charles decides to improve himself limb by limb in a grimly hilarious skewering of corporate culture.

Over the years, Barry’s novels have been optioned for film and disappointingly several projects have not gone beyond the blue sky phase; I was rather excited at the news that Steven Soderbergh and George Clooney’s Section 8 films optioned Jennifer Government, but so far nothing on that score. But someone out there has noticed the Vast Talent that is Max Barry and 2012 will see the release of Syrup from director Aram Rappaport. Max Barry flew to America and watched the filming and even got a small cameo role.

Ok so Max Barry has written four novels–two of which are the funniest books I’ve ever read, and now it looks as though he’s about to get some long delayed-global recognition, but there’s a lot more to this author that makes him exceptional. Max has also taken control of his own marketing–albeit that no-one was interested in Max back when his first novel was out-of-print, but any new author out there could learn a thing or two from Max. Max has maintained an active website since 1999 and keeps in touch with his fans (and I’d like to think we’re a little nuttier and stranger than the average readers) via an e-newsletter. In 2004, Max converted his website to a weblog where he shares his news. On the site, you can check out NationStates, a game designed by Max to help market Jennifer Government:

NationStates is a state stimulation game. Create a nation according to your political ideals and care for its people. Or deliberately oppress them. It’s up to you.

Max even has a few videos up on youtube. But if you want to get a taste of Max’s wonderful sense of humour, check out his weblog where you will see comments about nasty critics in a piece called Things Critics Do That Piss Me Off . Here’s Number 3:

#3: Spots Plot Holes That Are There

Max Responds: Shut the fuck up! Go write your own novel, you hack!

And on the Q& A subject of whether or not Syrup is based on Max’s sordid period of employment with Hewlett-Packard:

That’s a filthy lie. Why, if HP was like Syrup, it would be a seedy den of politics and corporate back-stabbing, brimming with sexual tension. That is absolutely not true. There was very little sexual tension.

Actually, HP was a great place to work and taught me a lot about how companies function. I worked with some tremendously talented salespeople, most of whom used their powers for good instead of evil.

As a reader of crime fiction, I’ve noticed that many crime writers tend to take a different type of approach from other so-called literary authors that leaves no room for ivory tower elitism. Not only do many crime writers maintain extremely active blogs (thinking Max Allan Collins, James Sallis, Duane Swierczynski here), but there’s also a high level of reader involvement. Duane Swierczynski (Severance Package, The Wheelman), for example, is even organizing a Philadelphia bus trip January 2012 to the grave site of author David Goodis (Dark Passage). Crime writers don’t seem to feel the need to distance themselves from fans; perhaps they’ve even learned that maintaining a place for readers to check to see what they’re reading and writing is actually a good thing, or there again perhaps they’re tougher than their average readers, and they’re not scared to get within punching distance. Whatever the reason behind this internet-author-reader-relationship, this is the sort of proximity I see in Max Barry–there’s an innate humility in this writer that makes me, as a reader, cheer for his success. He’s an Everyman who’s worked in mind-numbingly boring, demeaning jobs, and he just happens to have the talent to write about his experiences which become, in turn, our experiences. He’s not just a writer who produces a book once in a while; if you’re a fan, you’re involved. We’ve been with Max through his disappointments and his successes, through the birth of two children (to clarify, Max’s wife, Jen  gave birth–not Max), and when Max wrote a serial called Machine Man, newsletter subscribers got to read chapters and give feedback. When Max landed a book contract for Machine Man, we even voted on the choice of cover.  It makes me feel all warm and fuzzy just thinking about it…. Sniff…

… and you’ve made us all warm and fuzzy with your passionate post Guy. I recently bought Company – I just have to find time to read it! Meanwhile, readers here might like to check out Book Around the Corner’s reviews of Syrup and Company and Guy’s own reviews of Jennifer Government, Company, and Machine man.

16 thoughts on “Monday musings on Australian literature: Guest Post from Guy of His Futile Preoccupations”