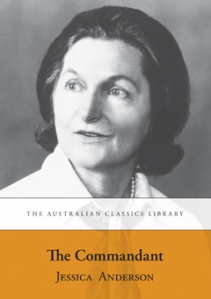 When I first read about Sydney University Press’s Australian Classics Library, the book I really wanted to read was The commandant by Jessica Anderson. It’s her only historical novel, but its subject matter doesn’t stray much from what she told Jennifer Ellison in an interview many years ago, “I was very much, and always have been, preoccupied with people who are strangers in their society” and “I am interested in families… They are interesting – you know, the tangle” (Rooms of their own). This is a clever and thoughtful novel by yet another much overlooked Australian woman writer.

[WARNING: SPOILERS, if you don’t know the history on which this is based]

The plot is pretty simple. It is set in Queensland’s penal settlement of Moreton Bay in 1830. It draws from the real story of the commandant there, Patrick Logan, who was noted for his harsh methods and who was murdered while out on an expedition. In the novel, Logan’s family is joined by his wife’s young sister (“the stranger”), Frances, who, on her way up to the settlement via Sydney, has been introduced to “radical” ideas critical of Logan’s regime. The scene is therefore set for potential conflict either between Patrick and Frances, or within Frances herself, or both.  In the end, it is a bit of both as Patrick finds his practices questioned and Frances confronts the realities of living in a penal settlement.

Except for Frances’s boat trip up to Moreton Bay with some of the settlement’s residents, the novel is set entirely in Moreton Bay. The characters include Logan’s household (family and servants), his wife Letty’s two women friends, officers of the settlement including two medical officers and the man sent to replace Logan, and of course some prisoners. There are also some characters in Sydney – Frances’ would-be beau and the sisters of a newspaper editor jailed for his criticism of the regime and against whom Logan is bringing libel action. The characters are well-drawn, with the significant ones nicely complex. You get a good feel for life in the settlement.

I would love to write about many of the characters as there are some wonderfully meaty ones, but I’ll just focus on Frances, the only character, really, who changes during the course of the novel. At the beginning, she “was seventeen; she was not stupid, but was often absurd”. She is also sympathetic to the idea of reform, which she says she developed through seeing servant life and poverty first-hand in Ireland and which puts her at odds with many in the settlement. She has a lovely ability to question herself, to see her failings, and it is this which enables her to learn from her several painful experiences. By the end, she is wiser in the ways of the world and has learnt to live with “incurable knowledge”, but has not lost her commitment to the cause of humanity.

Much of the story is told in dialogue – in fact, it wouldn’t be hard to turn it into a play/screenplay. Anderson handles this dialogue well, nicely differentiating the characters, from Letty’s lisp to officer Collison’s uneducated speech patterns. Letty’s lisp is an ironic touch – it lulls us into thinking she is one of those superficial flirtatious women but we soon discover that she is more complex than just a pretty little wife. Characters are nuanced by their reactions to each other  as well as by what they say, rather than by a lot of specific authorial comment, though there is that too.

There is also description, including some particularly beautiful ones of the bush during the search expedition for Logan, such as:

…a few clumps of trees, their rough bark the colour of iron, and their foliage a dun green, stood with the junction of trunk and root shrouded (my emphasis) by tall pale grass; and although at his left the river marked out a fissure of brighter greens, none among them were the sappy (again my emphasis) greens of England and Ireland or the dense fleshy greens of the coast … Among and behind this scrub stood big trees with foliage in similar colours, and with trunks of grey, or silvery grey, or of mauve shading to grey or rust, or of the beautiful colour of pink clay. It was as if everything here inclined not to the sun’s bright spectrum, but to those of the mineral earth and the ghostly daytime moon.

This is not an entirely benign landscape she is decribing – but neither does it hang heavily on her tale: her main focus after all is people. Here is an evocative description of Letty:

She fragmented the worry with her laugh, and waved it away with her hands, but it always seemed to reassemble, out there in the air, and float back to resettle on her.

One of the things that intrigued me most about the novel as I was reading it was the narrative form. It is a pretty straight chronology, but with many small flashbacks that help illuminate the characters. Most interesting though are a couple of slight but meaningful foreshadowings which, before the novel’s end, give us a sense of the sisters’ futures. This makes us realise that the novel is not really about them…it is about humanity, about how we treat each other – and, about that special word, mercy. You will have to read it for yourselves to know what I mean.

6 thoughts on “Jessica Anderson, The commandant”