I’ve said it before and I’ll probably say it again, the Griffyns are a tricksy lot. Their second program for 2014 was titled The Three Futurists and was aligned with National Science Week. The theme was “Do you believe” – but we quickly realised that it wasn’t only do you believe in something, though that was certainly part of it, but also do you believe what you are told/what you hear, which is, I think, a more challenging proposition in our media-saturated world. 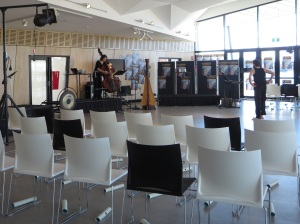 Pre Show, with scrolls under seats, and double bassist and a dancer doing a last minute practice

And so, early in the second half of a program that twice had the audience filling out forms, we completed the “Truth assessment” answer sheet from the scrolls under our seats. The sheet had no questions on it; they were read out to us. The questions were about climate change. On finishing our sheets, we were asked to show our hands if we’d answered “a” to a particular question. I was surprised when my seatmates who, I know, “believe” as I do on the issue, raised their hands. Huh? I felt disconcerted – for a moment. And then came: “Do you believe your answer sheet is the same as your neighbour’s”? I looked, and sure enough, Mr Gums’ “a” was the opposite to mine, that is, it was the same as my “b”. Whew, but the point was made, in a very practical way! Don’t take anything for granted!

This year’s theme, as I wrote in my post on the first concert of the year, is Fairy Tales, but they define it broadly to mean “spooky stories and twisted tales”. So far they are keeping their promise. The Three Futurists – aka (Mechanical) Evolution, Prophecy and Armageddon – confronted us with the usual Griffyn challenge. By this I mean, you don’t expect at a Griffyn concert to be transported into a peaceful reverie or to be allowed a simple emotional response; you expect to be intellectually challenged. This is not to say that the music doesn’t move or transport, but that a Griffyn program usually demands an additional level of commitment from the audience. These are artists who like to present ideas, often political ones, through their music. I don’t believe art must be political, but I do like it when artists want to engage politically. Put it down to the 1960s-70s idealist in me!

Anyhow, onto the actual concert. The Griffyns were joined by Liz Lea and four dancers from QL2, Canberra’s youth dance ensemble. An inspired idea, as they added a special dimension to the show. The choreography was expressive, and the dancing – in solos, duets, trios and in ensemble – was lovely and mostly sure. Their representation of mechanical evolution, of robots, was very effective – jerky but with an appealing fluidity that engendered some sympathy for these mechanical life-forms rather than rejection. I also liked Liz Lea’s ancient priestess dance that accompanied the “Song of Seikilos”. According to the program notes, its text comes from around 200BC-100AD:

I am a portrait in stone
I was put here by Seikilos
Where I remain forever,
the symbol of timeless remembrance.

Interesting that this lyrical, graceful reminder of timelessness was bookended by mechanical robots and intimations of Armageddon!

As usual with the Griffyns, the music ranged across genres. It’s one of the things I love about them. In this concert we heard arrangements of older or familiar pieces from popular culture, namely a thoughtful and provocative rendition of Rodgers and Hammerstein’s controversial song “You’ve got to be carefully taught” from soprano Susan Ellis, and Radiohead’s confronting “Fitter Happier”. We also heard the Australian premiere of musical director Michael Sollis’ “Happy Deathday Mister Robot” (listen to a recording made in New York).

Appropriately, much of the music had a strong electronic aspect. I was fascinated by the three pieces by new-to-me Netherlands’ composer Jacob TV (Jacob ter Veldhuis), which use ghettoblaster accompanied by musical instruments such as, in Sollis’ arrangements, flute, harp and/or double bass. Some unusual conjunctions there but they worked in their eerie way. The strangest piece was “Jesus is coming” which includes, among other sounds, some repetitive (and mesmerising) baby talk, but the most confronting was the last piece, “Believer”. In it, Jacob TV incorporates the distorted voice of journalist Bill O’Reilly interviewing George Bush Jr in 2004 about the Iraq War and asking him “So you are indeed a true believer?”. Bush’s response “I believe peace is coming” is what – naive, disturbing, ironic?

I haven’t, I’m afraid, talked much about the musical performances. There was so much going on – the music, sometimes with the ghettoblaster, occasional commentary from the computer (did I mention that before?), live speech, and the dancing – that it’s difficult in retrospect to single out specific performances. So let me just say that the playing was exactly what we’ve come to expect – professional, thoughtful and engaged.

And so what did Mr Gums, our friends and I take away from the concert? Well, primarily that we’d been stimulated to think more upon’t. And that, I think, means it was an excellent afternoon.

You can hear other versions of some of the music on You Tube, such as:

4 thoughts on “The Griffyns ask Do you believe?”