For my second Let’s Get Physical post, I thought I’d stay in my local region. The Monaro is a large region in southeastern New South Wales, extending from the southern and eastern boundaries of Canberra down to the Victorian border, and bounded on the east and west by mountain ranges. Much of it is treeless plain, but there are also rolling hills, rocky outcrops and jagged mountains. In summer it takes on a golden hue and I love it, I love the sense of clarity, openness and freedom I feel when we drive through it on our annual trip to the Snowy Mountains for some summer bushwalking. 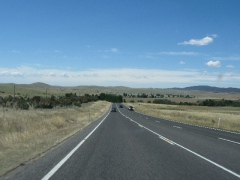 Not at its best, but you get the picture

As its main agricultural use is sheep and beef, I used to think, like many people, that its treelessness came from clearing for grazing and/or overgrazing, but in fact the first white people in the area found it in that state. The Austrian naturalist and artist, John Lhotsky described it in 1835:

The scene all around was composed of undulating downs, long projected hills among them, covered with very few trees.

Lhotsky, though, wasn’t the first white man to write about the region. In his book Discovering Monaro: A study of man’s impact on his environment, which is excerpted in Canberra’s centenary anthology, The invisible thread, historian Keith Hancock quotes English naval officer, Captain Mark John Currie. In 1823, Currie also saw, as Hancock describes it, “open, undulating, ‘downy’ country”. It was Currie who learnt the name of the region from the indigenous Australian inhabitants. He wrote:

Passed through a chain of clear downs to some very extensive ones, where we met a tribe of natives, who fled at our approach, never (as we learned afterwards) having seen Europeans before … by degrees we ultimately became good friends … From these natives we learned that the clear country before us was called Monaroo, which they described as very extensive …

Currie and his party, though, decided to call it Brisbane Downs after the Governor of the time. Hancock continues:

Mercifully, that new name did not stick. The white settlers, as they moved in, called the country Monaroo, Monera, Maneiro, Meneiro, Meneru, Miniera, Monera, and – in the fullness of time – Monaro.

What’s in a name, eh? One of the things I love about the region is, in fact, its names. The towns include Nimmitabel, Adaminaby, Bombala, Michelago; and the rivers include the Murrumbidgee and the Goodradigbee. I love how they roll off the tongue.

The Monaro is well represented in Australian literature. It is where  Miles Franklin was born and set some of her novels; the poet David Campbell was sometimes called “The man from the Monaro” and poet Judith Wright lived for many years in the region. Current authors associated with the region include Roger McDonald whose historical Miles Franklin Award winning novel, The ballad of Desmond Kale, is set in the region. When that book came out, he said

In my adult life I always wanted to live back in the country and I was able to do that from about 1980 onwards when I bought a farm in Braidwood [in the Monaro]. I’m never completely myself unless I’m in the Australian countryside. It’s my vocabulary of self somehow … I think it’s in all my books.

I rather know what he means. I live in a city, but its nickname is “the bush capital”. The countryside is never too far away – and I like it that way.

Back to Braidwood though. It seems to be a bit of a mecca for artists. This is where Judith Wright lived for many years, and it’s also where Julian Davies, author, potter and painter has lived for over three decades. He wrote about it Meanjin’s Canberra edition, which I reviewed earlier this year. In his piece, “Out of town”, he describes how he built his hut and established a semi-self-sufficient life there. “The irony” in this, he says, “is self-evident”:

the stubbon pursuit of a relatively isolated life has been an attempt to marry what might be irreconcilable: I moved to the forest because of exactly what it is, but tried to bring a level of comfort and civilisation with me.

If you’d like to know more about Braidwood, and its little corner of the Monaro, do read author Nigel Featherstone’s piece, “Naturally inspired”, in which he considers whether a place can be “creative”. Or read Irma Gold’s post on and interview with Roger McDonald for The invisible thread.

Finally, just in case I haven’t convinced you of the significance of the region, I should add that it has a car named after it, the rather dashing Holden Monaro!

20 thoughts on “Monday musings on Australian literature: Let’s get physical – The Monaro”