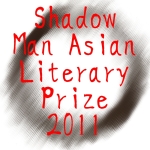 Image by Matt Todd of A Novel Approach

What a shame Jahnavi Barua‘s novel, Rebirth, is, to the best of my knowledge, available “for sale in the Indian Subcontinent only” (backcover). Our Shadow Man Asian team had real problems tracking this one down, but I’m very glad we did manage to obtain some copies, eventually, because this is a beautiful book.

The title, Rebirth, might give you a sense of its subject matter – but, then again, it mightn’t! The novel – novella really – is a first person monologue by a mother to her unborn child. The child is waiting to be born – not reborn – but there is a sense that for the mother, Kaberi, a rebirth might be in the offing as she explores the state of her shaky arranged marriage, and of some tricky or unresolved relationships with family and friends.

While set in India – in Bangalore and Guwahati (in the troubled province of Assam) – this novel does not have the noise and energy that often accompanies stories from the subcontinent. It’s quiet and contemplative. Moreover, while it is imbued with gorgeous descriptions of the plants and landscapes of India, and while it refers to the ongoing political unrest in Assam, it is not specifically Indian in theme. Its story is universal, that of the desire for love between husband and wife, and of the love of a mother for her child. And here is the difficult part, because it is hard to describe this largely plotless novel without making it sound twee or mawkish, but somehow it is not that at all. Barua manages to find a voice for Kaberi that is tender but matter of fact, that is tentative but also confident. The progression is chronological, commencing with her husband leaving her for another woman at the beginning of the novel just as she discovers she is pregnant (after many years of trying). She doesn’t tell him – or her family and friends – for some long time as she considers her life. In the opening paragraphs we are given a picture of her as somewhat passive and inward-looking. Before her husband left, she says she

had been partial to the large soft sofa in front of the television, from where I had a good view of the screen, but from where I also looked inwards, into the heart of the house. I did not see much of the sky or buildings clustered around our own, but all that, anyway, did not cross my mind very often, so focused was I on your father and myself and the home we had fashioned together.

Ah, we think … a person ripe for “rebirth”. And yes she is, but it is slow and undramatic as she gradually, by meeting friends, remembering her old childhood friend who’d died in a bombed bus in Assam, and reflecting on her marriage past and present, comes to a better understanding of who she is. Early in the novel she, a keen reader, says:

I will not buy a book today. I will try and live in my life instead.

As the novel progresses, we find that she is, in fact, stronger and more directed than we (and, more to the point, even she) had realised. She has, for example, written a book and organised for her friend Preetha to illustrate it. This is no simple thing, but her husband, “whose public manners were always nice”, knows nothing of this. Ah, we wonder, what is she saying about his private manners, the way he treats her? We learn, through more stories in the next few pages, that what she hasn’t received from him is tenderness and love. But we also receive a clear sense of strength growing in her:

This comes about a quarter of the way through the novel … the rest explores, in the same quiet tone, how things fall out for Kaberi, how she confronts her fears and insecurities. Things do happen – her father dies and she returns home to Guwahati, she eventually tells her husband, family and friends about her pregnancy. You can’t hide that forever after all! In other words, there is a plot of sorts, but the story is mostly an internal one and the ending is appropriately open albeit also with some sense of things resolved.

A little over halfway though the novel Kaberi says:

Birds wheel around slowly in the cloudless sky. Seemingly aimless, but I know better; little happens in nature accidentally.

And, I’d say, little happens accidentally in the writing of this book. It has been carefully and subtly structured to lay the foundations for Kaberi’s growth, and this makes it an absolute pleasure to read.

For other reviews by the Shadow Man Asian team, please click on my Man Asian Literary Prize page.

(Review copy supplied by Penguin Books via Lisa of ANZLitLovers)