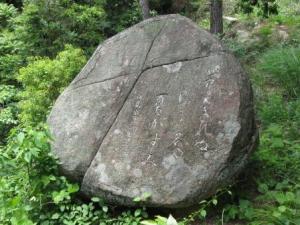 Haiku by Suiin Emi, along the Path of Literature in Onimichi, Japan

Papa Gums loves to give me clippings of obituaries that he knows will interest me. Last week, from his hospital bed, he gave me one for an Australian poet I’d never heard of, Janice Bostock. She was, according to the obituary in the Sydney Morning Herald, “one of Australia’s leading writers of Japanese poetic forms”, and won awards here and overseas. She particularly loved haiku.

Haiku, I must say, was the only form of Japanese poetry I had heard of until my first trip to Japan in 2006 when, on the railway station of our son’s tiny town of Tsugawa, we met an ex-teacher at his school who was heading off to her annual tanka conference. Tanka? Well, we discovered that tanka is an older Japanese verse form than haiku, and its basic structure is 5-7-5-7-7 “onji” (which we roughly translate to “syllables”). I guess most people reading this blog will know that haiku’s structure is 5-7-5. And here endeth the lesson on Japanese verse forms because the story is far more complicated than I’ve presented here, both in terms of these forms and other forms I haven’t mentioned. You can Google if you want to know more!

Bostock, who is briefly mentioned in the Wikipedia article on haiku in English, described haiku as “one-breath poems”, meaning that each poem “spans the length of one breath”. She also, and this was another new thing to me, practised a variation of haiku called “one line haiku”. Here is one quoted in her obituary:

no money for the busker I try not to listen

The obituary says that Bostock created the market for haiku in Australia by founding a journal called Tweed. She also wrote – and this of course appeals to me – The gum tree conversations. This was a series of articles aimed at showing “the relevance of haiku to the Australian landscape and experience”. Eventually her work led to the foundation of the Australian Haiku Society in 2000, of which she was patron at the time of her death. She was clearly a busy, engaged and passionate woman.

And so, haiku is alive and well in Australia … and it seems appropriately so. John Bird, who co-edited The first Australian Haiku Anthology with Bostock, has described haiku as follows: “a brief poem, built on sensory images from the environment. It evokes an insight into our world and its peoples.” As I understand it, haiku tends to involve the juxtaposition of two ideas or images in a way that a relationship is drawn between them. Australia, with its stark, dramatic environment, its odd vegetation and its strange creatures, must provide excellent subject matter for this sort of writing. Here is an Aussie haiku by E.A. Horne:

You can feel the pain of a farmer facing drought! It’s from an article first published in 2006 in the Australian poetry magazine, Five bells. Reeves, the author, says that “Contemporary haiku rarely consist of 17 syllables, may be written in one to four lines, and don’t have to be about the seasons. What they seek to retain is the brevity, clarity, immediacy and resonance of Japanese haiku and to record and share a moment of seeing”. I’m no expert in haiku, but it’s a form that appeals to me – because of this brevity that gives rise to a spareness, an attempt to pare to the essence of a thing. There’s no opportunity in haiku for effusive or loquacious explorations!

Tanka poems show a similar restraint and so, because it’s nicely appropriate, I’ll conclude with one of those:

Are you familiar with – and do you like – these tiny poetic forms?