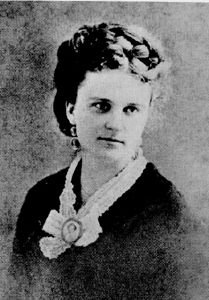 Kate Chopin: What a lovely face (Public domain, via Wikipedia)

Besides Jane Austen’s works, there are only a few novels that I have read more than once. One of these is Kate Chopin’s The awakening. I was trying to think of an adjective to describe it or my feelings upon reading it, but couldn’t think of anything that wasn’t clichéd. The best way to convey my response is, in fact, the way I have – and that is to say that I’ve read it more than once!

Kate Chopin’s short story, “A respectable woman” (1894), is this week’s Library of America (LOA) offering – and you can read it here. I haven’t read and blogged all of the LOA stories that have lobbed in since I subscribed, but I have done so rather more than I originally expected. This is because they have confronted me with:

As you’ve already realised, Kate Chopin falls into this last category. I was stunned by Chopin when I first read her back in the early 1980s – and this was because I hadn’t before read a 19th century novel that was quite so honest about women’s experience. Thank you Virago!

Written in 1894, 5 years before The awakening was published, “A respectable woman” made me laugh. That’s not quite what I expected when I started it. After all, it is by the author of The awakening! “A respectable woman” has a simple plot. Mrs Baroda (we never learn her first name, she being the woman of the title!) and her husband have just come to the end of the of a busy entertaining period, and she is looking forward to “a period of broken unrest, and undisturbed tête-a-tête with her husband”, but it’s not to be. Her husband, Gaston, has invited his friend Gouvernail to stay…

This is a very short story – just 4 pages – but Chopin is well capable, through some well chosen words, of leading us along. The title for a start sets us up with a number of impressions and expectations that tease us as the story progresses. Will she, won’t she, is the question that follows us. The introductory description of Gouvernail subtly tells us as much about her (and her life with her husband) as about him:

He had been her husband’s college friend; was now a journalist, and in no way a “man about town”, which were, perhaps, some of the reasons she had never met him.

Clearly they are a well-to-do couple moving in other circles. They have a good though not perhaps a passionate relationship: “her husband – who was also her friend”. The story is 3rd person, and told from her point of view – and it explores her reactions to this rather taciturn, self-possessed man who, towards the end, admits that all he now seeks is “a little whiff of genuine life”. What she is learning about herself though is something different:

She wanted to draw close to him and whisper against his cheek – she did not care what – as she might have done if she had not been a respectable woman.

This story is not as iconoclastic as The awakening, but it moves in that direction with Chopin exploring the inner workings of women and their hearts in an honest and sympathetic way. The story plays ironically on the notion of respectability and what that means for women. As for whether she does or doesn’t, well, that’s for you to find out. My lips are sealed.