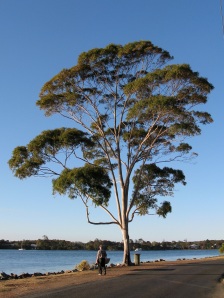 This is, I believe, a Sydney Blue Gum (Eucalyptus saligna) though I could also be wrong as I’m very much an amateur when it comes to tree identification. It does look like: they can be found up and down the east coast of New South Wales, of which the Hastings River is part, and they can grow to 60 or more metres tall which this one certainly seems to be aiming for. Whatever it is, I couldn’t resist photographing it. It rather dwarfs Mr Gums below doesn’t it?

Blue Gums are apparently the trees referred to in Henry Lawson’s 1919 poem, “Chatswood”:

And a little wood was on it, and the trees were tall and good,
And his young wife used to dream there, so he called it “Chattie’s Wood”.

“Chattie’s Wood” has long since gone, and shops are standing in a row
Where the young wife went a-dreaming in a the days of long ago,

Chattie was apparently Charlotte Harnett, the second wife of Richard Hayes Harnett, a North Shore Sydney landowner in the 1860s and one-time Mayor of Willoughby, and she did wander the Blue Gum High Forest of Chatswood West. The trees have long disappeared (from there anyhow) and some suggest that Lawson played a little loose with the specific details of their story but  it is generally agreed that Chattie’s Wood is the origin of the name of the Sydney suburb of Chatswood.

Another poem, “Blue Gum Forest” (1976) by Roland Robinson, was also inspired by these trees:

The blue gums soar, naked
smooth, to where they over arch …

This year Australian composer Matthew Orlovich set this poem to music for a capella choir. I’d love to hear it one day. Anyhow, these are just two examples I found by doing some quick research. It seems that while the Sydney Blue Gum may have made way for shops in Chatswood, they still survive – in both physical and imaginative form. Long live the gum!

11 thoughts on “Time for another gum”