The time has come, I think, to talk about disclosures. I have been blogging for just over six years now, mostly on literature but also, occasionally, on other cultural experiences – including the Griffyn Ensemble. The thing is that Canberra is a small place and we who move around it start to get to know each other. This is not unusual, but it does complicate the issue of reviewing/blogging. I’ve attended seminars and/or read discussions on reviewing “in a small world”. How do you be “objective” (not that we can ever be totally objective) when there’s been personal contact? And yet, how many literary reviewers in Australia do not know, have not met, the writers they review? Similarly, for music reviewers, or theatre reviewers?  Few, I’d say, once they’ve been in the game for a while and are reviewing people who’ve also been in the game for a while.

So, what does this mean? To what degree are “reviews” invalidated by such connections? To date I have disclosed when I have received books for review, but what other disclosures should be made? I’d love to know what you think. Meanwhile, I will say that Mr Gums and I identify as Griffyn Ensemble supporters. We like what they do and would love others to enjoy them too. This, I think, you need to know. 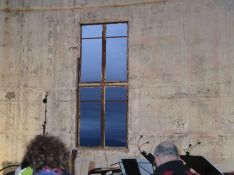 Waiting for “Southern Sky”, in the roofless, burnt out telescope, Mt Stromlo, Nov 2013

Now that’s off my chest, let’s get to the latest concert, Northern Lights. It was unusual for the Griffyns in that it comprised one piece, albeit encompassing 14 movements, composed by their musical director Michael Sollis. As Sollis explained to us at the beginning, it was his response to Estonian composer Urmas Sisask’s piano piece Southern Sky. The Griffyns had performed Sollis’ arrangement of this, with narration by astronomer Fred Watson, in the Mt Stromlo observatory ruin in 2012, reprised in 2013. That concert too comprised one multi-movement piece. To compose his “response”, Sollis visited the Arctic Circle with Fred Watson in November 2014.

Now, here’s where I want to reiterate the comment I made regarding rereading in my recent review of Peter Carey’s Amnesia. The same goes, surely, for other art forms. Consequently, when Northern Lights finished I knew I’d love to hear it again because there was a lot going on: I know I’ve missed some musical connections and relationships, and some finer points of the story being told. But, I did enjoy it. Let me set the scene …

Part of the stage set for “Northern Lights”

The performance took place in semi-darkness in the James O. Fairfax theatre at the National Gallery of Australia. We were given a glossy program booklet which featured photographs taken by Sollis on his tour, one photograph for each movement. It was a bit of a challenge to follow the program in the semi-dark but I managed pretty well. In his introduction, Sollis told us that, while Watson’s tour focused on the northern lights, he was aware of other lights too – particularly the long twilights – and that he wanted to capture this fuller experience in his piece. The semi-dark ambience, with occasional soft changes in light levels, was intended to convey some of this. I rather liked the dark – it certainly helped keep our focus on the music and the musicians for a start!

In keeping with the Griffyn Ensemble’s style, this was more performance than pure concert. Sollis incorporated both science and myth into his work, by paralleling a scientific narration by Fred Watson (via recording) with a Snow-White-like-fairy-story-cum-norse-myth about a young girl who, cursed, is banished from the sunny sky to a dark earth where the sun can’t reach. She must find the sun to break the curse. Consequently, the culmination of Northern Lights was not “The Aurora” (Movement 12), but “Celestial Sunlight” (Movement 15*). The story takes place over 24 hours, with the times marked against the movements in the program (except for the first and last movement).

Now the music. I guess you would broadly define it as modern or contemporary classical – but, before you think it, this does not mean it was discordant or inaccessible. It wasn’t traditional by any means in form or sound, but it was evocative music, impressionistic even, if I dare invoke that term.

The ensemble, in its current line-up, has been together for around 18 months now and they look comfortable together. It’s an unusual grouping of instruments but for the audience, or me at least, it provides some exciting opportunities to hear different combinations of sounds. In Northern Lights, Sollis pushed the instruments, including Susan Ellis’ voice, to convey a range of moods and sensations. We heard whales singing, water dropping, ice creaking, particles popping; we sensed the melancholy of the long nights and the joy of the aurora.

I can’t possibly talk about all 14 movements, so I’ll just mention a few highlights which I hope I’ve remembered correctly. In “Amnesia near a  Stream” (2) played by the full ensemble, I particularly enjoyed the swelling sounds of Laura Tanata’s harp to evoke dawn or, at least, the awakening of the girl sent to earth. I also loved the harp’s gentle repetitive phrases in “Goodnight Aurora” (14), but in other movements this traditionally angelic instrument surprised us with more grating sounds. There was a lovely, melodic, singing folk-like tune, reminding me somehow of the American west, from Chris Stone’s violin in “Under Ground” (8). This piece was accompanied by some beautiful percussive effects from Holly Downes’ double bass. “Floating” (9) featured Susan Ellis, with eerie echo, and the violin. Ellis also moved us with what must surely have been challenging high humming in “Emerging Dots of White” (7). Kiri Sollis was kept busy playing piccolo, flute and alto flute (thought not all at once!) In “Excited Particles Flying High” (11) the piccolo shone as the excitement built. The sound of sheets of paper vibrating and crackling at the end of this movement was wonderfully effective. Through all this Sollis was busy conducting (with his body or eyes), attending to the mixing in of the spoken word components, or playing his guitar or mandolin.

The overriding questions are, I suppose, how well did the science work with the fairy story, and does the music hang together as a whole work. I can’t answer that on one performance, but I certainly came away feeling I’d once again experienced excellent musicians playing music that engaged both my brain and my spirit. What more can you ask, really?

* Although the last movement was no. 15, there were only 14 movements, as there was no no. 13 – a nod, presumably, to superstition and perhaps to the mystical aspects of the journey we were taken on.

12 thoughts on “The Griffyns take us north – way north”