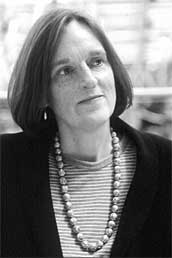 Tessa Hadley (Courtesy: Macmillan Books, via their “noncommercial” terms of use)

“Friendly fire”, a short story by the English writer Tessa Hadley, is a simple story of two middle-aged women cleaners in an industrial warehouse, Pam who owns the cleaning business and her friend Shelley who is helping her out for the day. The story focuses on Shelley and nothing much really happens – it’s more about what goes through Shelley’s mind as she cleans the factory floor and its toilets.

The first thing that strikes about the story is the language: the stars are “like flecks of broken glass” and “she let the cold creep into her as if she were made of stone”. Very quickly we get the sense that Shelley is not the happiest person on the planet. Hadley also uses double negatives – “they didn’t make a bad team” and “it wasn’t that she wasn’t proud” – further conveying Shelley’s less than joyous feelings about life.

So, what happens? Shelley and Pam go to the warehouse, clean (one upstairs and one downstairs) and then leave for home. While she is cleaning, Shelley thinks about her son Anthony who is a soldier in Aghanistan, and we realise that it is her fear for his safety that occupies her mind day and night, that colours her emotions. The title of the story comes from her worry that her son might have been involved in a friendly-fire incident. Her husband tells her: “Why d’you have to make up trouble … as if there wasn’t enough already?” In between, she thinks about the ups and downs of her marriage, her daughter’s teen pregnancy, her menopausal loss of libido. Life certainly seems rather circumscribed these days for Shelley. Even her husband’s playful phone messages – about funny place names like the Fishmonger called “A Plaice to Go” – fail to lighten her spirits. Perhaps she’d like to be in a different place?

At the end of the day, they return to the car and “the sky was a blue so pale that it was almost no colour”. Muted like her sense of her life! So, what is it about? Primarily, it is about the worries of a mother for her son engaged in an arena of war. It’s not dramatic, but it’s a nicely observed story that conveys the wider implications of our engagement in war, and how women – the mothers – bear much of that.