I know, I know, I sound like I’m obsessed with Helen Macdonald. I’m not, but I am interested in nature and landscape, and she has thought and researched at length about the topic. I’ve called this post a commentary, because it’s not a review. Rather, I’m going to draw on both an On Nature column she wrote for The New York Times Magazine and her book H is for hawk (my review) – and look at a political issue she raised in both writings.

I’ll start with a comment that occurs near the beginning of H is for hawk. Early in her hawk training sessions, she takes Mabel out walking in the streets of her town, but almost no-one speaks to her. They all saw her, she says, how could they not, but “they just pretended they hadn’t”. Except for those who did. A man from Kazakhstan saw her. They discuss Kazakh falconers, and he tells her “I miss my country”. A Mexican cyclist “skids to a halt” and admires Mabel, saying he’s never seen a hawk so close, only high in the sky where they are “free”. And then she realises

that in all my days of walking with Mabel the only people who have come up and spoken to us have been outsiders: children, teenage goths, homeless people, overseas students, travellers, drunks, people on holiday … I feel ashamed of my nation’s reticence. Its desire to keep walking, to move on, not to comment, not to interrogate, not to take any interest in something peculiar, unusual, in anything that isn’t entirely normal.

I thought, interesting, but moved on, with her, to the next part of her story.

Then, late in the book, she’s out walking with Mabel again, and runs into a retired couple she knows. They exchange pleasantries, including discussing the beauty of a herd of deer they’d all seen. Their conversation concludes with:

“Doesn’t it give you hope?” he says suddenly.
“Hope?”
“Yes,” he says. “Isn’t it a relief that there’re things still like that, a real bit of Old England still left, despite all these immigrants coming in.”

Helen is horrified, but says nothing. However, as she walks home she thinks

… I should have said something. But embarrassment had stopped my tongue. Stomping along, I start pulling on the thread of darkness they’d handed me.

She thinks of why and how people and creatures move between countries, of Göring’s desire to move Jews from Germany, of Finnish goshawks in England, of a Lithuanian mushroom gatherer in England who couldn’t understand why English people didn’t know which mushrooms in their woods were and weren’t edible. She says:

I think of all the complicated histories that landscapes have, and how easy it is to wipe them away, put easier, safer histories in their place.

Today’s “Old England”, for example, is not, actually, the England of 100 years ago, let alone 400 hundred years ago, given the impact of settlement and agriculture on the land and its “natural” inhabitants. And those deer? Well, they and the hare are “legacies of trade and invasion”, albeit back to Roman times. Immigrants in their day, in fact. She suggests that instead of fighting “for landscapes that remind us of who we think we are”, we should “fight, instead, for landscapes buzzing and glowing with life in all its variousness”. 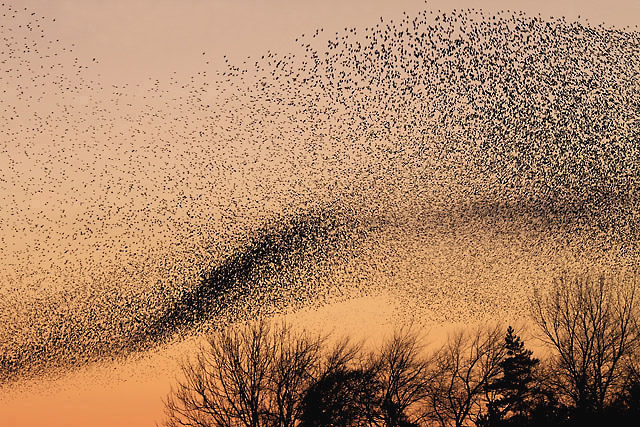 This brings me to the article, “Human flock”, she wrote for The New York Times Magazine. It’s about waiting and watching at a lake in Hungary for a flock of Eurasian cranes on their southward migration. Are you catching my (her) drift now? She talks of various migrating birds, sandhill cranes, snow geese, and starlings. She describes a murmuration, the collective noun for a flock of starlings. She discusses why these birds flock. The reasons include for protection (out of fear), to signpost where they are to other starlings, and for warmth. These flocks, though, are also made up of “thousands of beating hearts and eyes”, of individual birds in other words..

As she watches and thinks, her mind turns to “more human matters”, to the “razor-wire fence” built by the Hungarian government to keep Syrian refugees out. She writes:

Watching the flock has brought home to me how easy it is to react to the idea of masses of refugees with the same visceral apprehension with which we greet a cloud of moving starlings or tumbling geese, to view it as a singular entity, strange and uncontrol­lable and chaotic. But the crowds coming over the border are people just like us — perhaps too much like us.

The flock made her realise that “in the face of fear, we are all starlings, a group, a flock made of a million souls seeking safety”. But flocks can also be transformed into “individuals and small family groups wanting the simplest things: freedom from fear, food, a place to safely sleep”. It’s a powerful statement for humanity. And I like the way it picks up ideas she touched on but didn’t explore at depth in H is for hawk.

Nature, or, more accurately, exploring its meaning for us and our relationship to it, is clearly an ongoing project for her. I’ll be interested to see how her ideas develop – but for now, you may be pleased to know, I’m moving on to other books and ideas!

PS Helen Macdonald gave the closing address at the 2015 Sydney Writers’ Festival on “On looking at nature”. She gets into nature, history, culture and diversity. It runs for around 38 minutes, and makes for great listening.