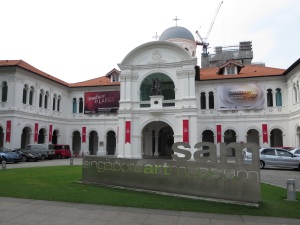 Mr Gums and I have had a busy few months, with, unusually for us, two overseas trips in less than four months. Both were family-inspired: Canada in April-May to visit our daughter, and then last week Koh Samui to help Mr Gums’ sister and husband celebrate their 40th anniversary. We decided to spend a few days en route to Samui in Singapore. What an interesting place it is. Although, technically, a new country which will celebrate its 50th anniversary next year, it has a much longer history, dating back to the second century. What we know as “modern” Singapore, though, began when the British, via Sir Stamford Raffles, established a trading post on the island in 1819. We didn’t see anywhere near enough but we tasted its variety –  including my topic for this post, the Singapore Art Museum (SAM).

SAM is housed in a gracious old 19th century missionary school building – the St Joseph’s Institution run by La Salle Brothers.  The building was constructed in stages, from 1855 to completion in the early twentieth century. It was acquired for the museum in 1992. SAM describes itself as having “one of the world’s largest public collections of modern and contemporary Southeast Asian artworks, with a growing component in international contemporary art”.

The current major exhibition, which will run for a year, is Medium at Large: Shapeshifting materials and methods on contemporary art. SAM explains that it

explores the idea of medium in contemporary art, probing some of the most fundamental and pressing questions of art – its making, and also our experience, encounter and understanding of it.

It’s the sort of exhibition I enjoy – modern, confronting and/or provocative, with useful interpretive signage. Of course, I enjoy the famous, classic galleries like the Louvre or Prado, just as I like to read classic novels, but I also enjoy seeing what contemporary artists are doing and thinking. I loved the concept behind this exhibition. In our increasingly fluid, interactive, interdisciplinary world, a focus on how art is made and how re relate to it, seems very relevant.

The exhibition comprises 32 artworks and apparently draws mainly from the museum’s permanent collection, but it also “includes loans and commissions from Singaporean, Southeast Asia, and Asian artists”. We are seeing more Asian artists here in Australia, but it’s exciting to visit Asian galleries where we can see art and artists less familiar to western gallery-goers. And so, we saw two portraits made using live bullets on sandpaper (by Filipino artist Alvin Zafra), and a sculpture made with human hair (Dutch-born Indonesian artist Mella Jaarsma’s Shaggy). We saw works that play with medium and form, such as an oil painting overlaid with a video projection (Indian artist Ranbir Kaleka’s He was a good man), a distressingly mesmerising video of a woman dancing on butter captured also in still photographs (Indonesian artist Melati Suryodarmo’s Exegie – Butter Dance), and another video in which a taut rope springs and snaps through architectural spaces (Singaporean Chen Sai Hua Kuan’s Space Drawing 5). Our minds were challenged by a video installation called The Cloud of Unknowing (by another Singaporean Ho Tzu Nyen) in which various residents in an apartment complex experience some sort of epiphany or understanding of something mystical. Some of the works, including this last one, have been exhibited at the Venice Biennale. 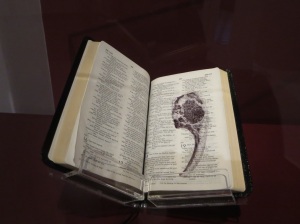 But, since this is primarily a litblog, I’ll finish with two works that incorporate books. The first one is, in fact, the first work that confronted us in the exhibition, Filipino Renato Orara’s* Bookwork: NIV Compact Thinline Bible (page 403). It comprises a lamb cutlet, finely drawn in ballpoint pen on a page of the Bible, a page from Job. Since Job is primarily about how humans can comprehend why an all-powerful God lets good people suffer, the piece raises all sorts of questions about “the lamb of God”, about sacrifice. The label suggests other tensions too, such as between word and image, between open/public (when the book is open) and hidden/private (when the book is closed), and, through imposing what is essentially a chop on the Bible, between the sacred and profane. I would add another tension – that between wonder at the delicacy of the execution of the image and feeling “gross” from seeing a lump of fatty meat on the Bible. A surprising work that stays with you. 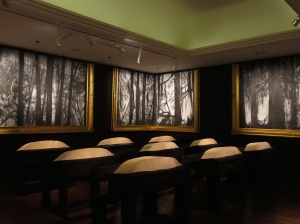 Part of Titarubi’s Shadow of surrender (2013)

The other work, Titarubi’s Shadow of surrender, comprises multiple components in a large space. I could not quite fit it all into my photo but it contains large, open, blank books on benches, with chairs, and with big charcoal drawings of trees on the walls. It was commissioned for the Indonesian pavilion at the 2013 Venice Biennale. It’s a complex work, with additional layers of meaning contained in the knowledge that the wood used in the furniture comes from colonial-era railroad tracks. The pieces are burnt, which apparently references the charcoal the artist’s mother cooked with, but which also links to the charcoal tree drawings. And, of course, trees provide the paper and wood used for books and furniture, suggesting a cycle of life theme too. The label refers to the fact that the books are empty implying a “tabula rasa” and the idea that it is time to re-write history or re-learn lessons, and thus develop anew leaving past colonial constructs.  An article about the Biennale on Titarubi’s website says that in this work he links “sakti” (‘divine energy”) “to both education and the environment, to knowledge and the natural world”. Another powerful and emotive piece, as you can see.

SAM was our last “sight” in Singapore and rounded off our visit very nicely!

* While researching where Orara was from, I discovered an article about artists using ballpoint pens. It starts with: “Accessible and affordable, the ballpoint pen has become the medium of choice for artists to make obsessive abstractions, extreme drawings, and playful riffs on venerated ink traditions”.

25 thoughts on “The meeting of art and literature, at the Singapore Art Museum”