Can you pronounce this? Toirdhealbhach Ó Cearbhallaín? Perhaps you’d prefer the English transliteration: Turlough O’Carolan. O’Carolan was a blind Irish harper* who lived from 1670 to 1738, and, according to Wikipedia, is believed by some to be Ireland’s national composer. He was also the composer and subject of this week’s Musica Viva concert.

Carolan’s music, the program notes said, “spans the divide between high art and popular styles and is a mixture of fashionable French Baroque dance forms, including minuets and jigs, combined with ancient Gaelic forms including laments and planxties**”. The Consort’s director, Lawrence-King added, during the concert, that he also incorporated Italian music that was being played in Ireland at the time. A true cosmopolitan it seems.

We’ve seen and enjoyed The Harp Consort before (around 2006), and so I was looking forward to this week’s performance. I was not disappointed. It was, by turns, wistful, humorous, lilting and lively – and thoroughly engaging. Mr Gums did hear one member in the audience suggest that they might as well have been at the Folk Festival! I can think of worse places to be – but this was, really, of a somewhat different ilk, albeit covering some similar ground. Anyhow, if you click on this link, you will hear some music emanating from their website. Go on, do it! If you are disappointed, I won’t expect you back here!

The performers at tonight’s concert were: 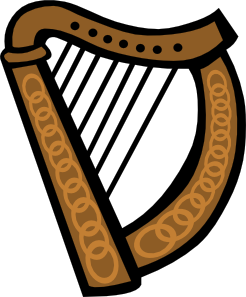 Before you read on, remember that I am not musically trained and would in no way call myself qualified to comment on technical skill and interpretation. However, this was the perfect performance for one such as me, who loves literature, dance and music, because it incorporated all three. Not only were there songs – with the words (fortunately with translation) printed in the program – but Andrew Lawrence-King told us Carolan’s story throughout the evening’s performance. I particularly enjoy concerts in which the musicians engage directly like this with the audience.

Then there was the dancing. If the other performers hadn’t been so engaging themselves, Steven Player would have stolen the show. He has a wonderful ability – as all good dancers do of course – to inhabit the character of each dance. The dancing style seemed to combine elements of Irish stepdancing and Scottish highland dancing – which probably makes sense since presumably these dance forms have all had some similar roots and influences. Anyhow, whatever it was, Player performed with grace and feeling – and gave his all.

And finally, the music. I have a soft spot for early music – for the lovely melodies and the gorgeous (in looks and sound) instruments. You can see from the performer list above that there was a wide range of instruments played. The music, including several songs performed with a lovely sweet voice by O’Leary, was appealingly diverse, ranging from laments to jigs, from love songs to comic ones.

It’s hard to pick a highlight from such a concert, but, I often find myself drawn to percussion. Metzler was fascinating to watch. He played numerous percussion instruments, including some unfamiliar to me, and a couple of novelty instruments (one to emulate birdsong, another the wind). And he, too, fully engaged with the character of the music he was performing, acting out parts when appropriate.

Overall, what I liked about the concert was the sensitivity with which the Harp Consort played the music, and the energy and exuberance they invested in the performance. It was, as they say, the total package.

Late in the concert came the comic drinking song, “Bumper Squire Jones”. It seems appropriate to end with some lines from it:

Ye clergy so wise
…
Come here without failing
And leave off your railing
‘Gainst bishops providing for dull stupid drones;
Says the text so divine,
“What is life without wine”
Then, away with the claret –  a bumper, Squire Jones.

None of us needed a claret that night. We were high enough without it.

*Harper: You learn something new everyday. According to Wikipedia, “harper” is used in the folk tradition, and “harpist” in the classical. The Musica Viva program used both, indicating perhaps that this was a bit of a cross-over concert!

**Planxty may, say the notes, have been coined by Carolan. It signifies popular, animated pieces in jig rhythm.