The things you find when you start to declutter! School friend annual 1964 is a blast from my very distant past. Yes, I know, some of you weren’t born then, but I can’t resist sharing the sort of books produced for young girls in the olden days! I loved receiving annuals and anthologies, books in my favourite series or by my favourite authors. The more books I received, the more successful I rated my Christmas. Anyhow, it’s fascinating to look at this over 50 years after it was published. 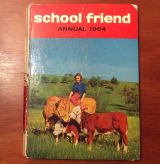 School friend annual was an English publication which was also distributed in New Zealand, South Africa, and the Federation of Rhodesia and Nyasaland. Loyal countries of the British Commonwealth, in other words. As far as I can tell it started publication in 1927 and lasted until 1982 by which time I believe it was all comic/picture strip. One article I read suggested that the 1960s are the most collectible!

I’m going to discuss the main contents of my 1964 volume by rough category, so we can look at the reading matter deemed suitable for the young girl and teen of the early to mid 1960s. It’s a time when the Beatles were starting to make their presence felt, when the Civil Rights Movement in America was well under way, but when the second wave of women’s liberation hadn’t really started:

So, plenty of illustrations, a few comics, a variety of stories covering a range of interests, plus the specific inclusion of horses, ballerinas, craft ideas and, most importantly, fashion advice. What more could a young girl want over the school holidays?