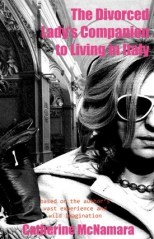 What would you say to a cross between chick lit, those mature-women-finding-themselves travel memoirs (like, say, Mary Moody’s Au revoir or Elizabeth Gilbert‘s Eat, Pray, Love), and Alice in Wonderland? Such a fusion is how I’d describe Catherine McNamara’s first novel, The divorced lady’s companion to living in Italy. Intrigued? Then read on …

The plot is simple. Marilyn Wade, a forty-something mother of two teenagers, is “dumped” in her kitchen by Peter, her husband of 17 years. After a period of disbelief and confusion, she decides to go to Milan where rumour has it that another neighbourhood “dumped” wife, Jean, is living a happy and glamorous life after finding true love at Machu Pichu. Jean, also, she believes, runs an English language school where she hopes she’ll find work. Enter Fiona, Federico, Brett, Arnaud, eventually Jean … and a whole new world, to put it mildly, for our Marilyn.

So, why do I describe it the way I did in the first paragraph? Well, to start with, it has elements of chick lit. Just look at the cover with its title in pink. But it’s not a pure chick lit cover is it? There’s no designer handbag or impossibly high heels, no tiny waisted 20-something young thing. Instead, with the exception of the title, there’s a rather classy black and white cover comprising half of a woman’s face that reminds us of more mature women, like, say, Sophia Loren. In fact, there are many references to Sophia Loren in the book. The cover, then, nicely sets up the content as having some thematic correspondence with chick lit but with a difference.

Because in fact, Marilyn’s search is not really chick-lit-like. She’s a mature woman who sees life a little more complexly, and this brings me to the second style of book I mentioned, the mature-woman-finding-herself-travel-memoir. Marilyn is not idealistic about true love and the desire to have it all that is common to chick lit. She’s been around the block, has been betrayed and hurt, and is more than a little jaded – but she has enough hope and energy to think she can still make something meaningful of her life and she leaves the comforts of home to do it. She takes risks – in all meanings of the word, if you catch my meaning – on her way to forging a new life for herself. (Fortunately, like chick lit heroines, she seems to have enough money to support her adventures into her self).

How then, you must be wondering, does Alice in Wonderland fit into all this? It’s not simply the adventures, because these would be covered by the travel-memoir genre I’ve described, but more to do with the rather fantastical world in which they occur. The world Marilyn finds herself in is characterised by somewhat bizarre people (or, at least, people who push our credulity) and by excessive coincidence. For some readers these may get in the way of their ability to suspend disbelief, since McNamara seems to take Chekhov’s gun theory seriously and pushes it to the limit. The first couple of coincidences had my antenna out, but then I got into the flow and actively looked for them. They made me laugh and feel part of Catherine’s fantasy (because, really, books in these genres are fantasy aren’t they? Or is it me who is jaded!?)

As for the writing itself, McNamara has clearly been honing her craft for some time. She has published a children’s book and several short stories. She has a lovely, original turn of phrase. And while at the beginning I felt she sometimes overused similes, as the novel wore on the writing tightened and became controlled and expressive without feeling overwritten. I liked, for example, the opening sentence:

An old friend of mine named Jean fell through a tear in her marriage and landed on her feet.

(Now, doesn’t that sound like Alice in Wonderland?). And I liked this description of Marilyn’s arrival in Milan:

Then, without waiting for my agreement, the woman who’d sold my husband the prize-winning beetle-eating show turned on her high heels and began to tug me into Milan.

Milan, the fashion capital of Italy where appearance is god, turns out to be quite a tricky place for mature-aged housewife Marilyn, but she’s ready for change and change is what she gets. She learns to smarten herself, without succumbing to the Italian fear of aging:

But this is awful [says her young lover Federico]. This woman she not know who she is anymore. She is like carnevale mask, very scary. But this is Italy now, everyone afraid to get old …

All up, The divorced lady’s companion to living in Italy is a fun and often funny read about friendship, love, risk-taking and changing direction.

Catherine McNamara describes this novel as commercial fiction. Her next book, which will be published by Indigo Dreams in 2013, is a short story collection titled Pelt and other stories and represents her foray into literary fiction. McNamara is serious about her career and is clear about her goals and her audience. From what I’ve read so far, I think we’ll be seeing more of her.

PS Elizabeth Lhuede of the Australian Women Writers Challenge will be proud of me. I have stepped out of my literary fiction comfort zone into genre, which will help me achieve my Franklin-fantastic Dabbler level of the challenge. Thanks Catherine for the incentive, and woo hoo!

Review copy courtesy Indigo Dreams Publishing via the author who has been, for several months now, a regular commenter on this blog.

12 thoughts on “Catherine McNamara, The divorced lady’s companion to living in Italy (Review)”