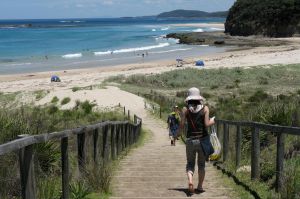 The sea and the beach therefore are another significant aspect of Australian cultural identity … and probably the best known contemporary writer about the beach is Tim Winton. Breath is his most recent novel, but most of his works are set in coastal areas and deal in some way with their characters’ relationship to the beach. For Winton, the beach and the surf stand for – not to beat around the bush – the meaning of life. In an interview with surfing writer Tim Baker, he says:

To me, surfing has always been soul-business. It’s the pointless things that give your life meaning. Friendship, compassion, art, love. All of them pointless. But they’re what keeps life from being meaningless. Catching a wave and turning and dancing and looping in toward the beach is one of the nicest forms of pointlessness I can think of.

That’s not to say that the beach is always positive in his work. The people who populate the stories in The turning, for example, live pretty disappointed lives in their coastal town/s. Nonetheless, when we think of Winton, it’s the love that tends to come through in the end. This love has apparently been explained in his recent memoir Land’s edge (2010), in which, according to the promos, he “records his life-long affair with the sea”. This is a book I must read.

Robert Drewe, like Winton, is based in Western Australia and writes regularly about the beach. His memoirs, novels and short story collections include The shark net, The bodysurfers, The drowner, and the The rip. He also edited The Penguin (originally, Picador) book of the beach. He, like Winton, claims to be drawn to the beach, but his books and stories explore the dangers and traps (as is pretty obvious from some of the titles!) of the beach and sea, as well as the beauty. Here is one character in The bodysurfers:

Parnell gave the impression he was king of the beach as well as of the mutton birds. He was what used to be known as a man’s man, meaning that he was a hearty male chauvinist … (from “The silver medallist”)

The coast is not what I expected. Not only is the pace faster, but there is a careless violent hedonism that astonished me at first. … When I can’t face the beach night-life, the coarse aimless lives, I close my window … (from “Shark logic”)

This mention of hedonism reminds me of the way the beach can draw into sharp relief our Western culture’s obsession with body image. Here is poet Les Murray in “On Home Beaches”:

Back, in my fifties, fatter than I was then,
I  step on the sand, belch down slight horror to walk
a wincing pit edge, waiting for the pistol shot
laughter …

So far this post has been male-dominated but there is one particularly well-known “beach” book (and later film) by women writers, and that is Puberty blues by Gabrielle Carey and Kathy Lette. It’s about two teen girls who want to become part of the cool, in-crowd on the beach, the surfie gangs, and is pretty critical of peer group pressure and male chauvinism. It’s a long time since I’ve read (and seen) it but I still remember the pain of their desperation to belong.

Hmmm … I think I have somehow managed to convey more negatives than positives about the beach and beach culture in Australia, so perhaps I will return to Winton (and Breath) to end on a high note:

I will always remember my first wave that morning … I leant across the wall of upstanding water and the board came with me as though it was part of my body and mind. The blur of spray. The billion shards of light. I remember the solitary figure watching on the beach and the flash of Loonie’s smile as I flew by; I was intoxicated. And though I’ve lived to be an old man with my own share of happiness for all the mess I made, I still judge every joyous moment, every victory and revelation against those few seconds of living.

Now is the time for me to ‘fess up. I am not really a beach person – but if anyone could convince me, it would probably be Winton.

18 thoughts on “Monday musings on Australian literature: The beach”