Back in June, I wrote a post on the ACT Writers Centre, and indicated then that I would gradually write about other state centres. So, today I am writing about the other pseudo-state aka territory centre, the Northern Territory Writers’ Centre. I’ve chosen this as my second one because I think the Northern Territory is often overlooked in terms of cultural activity – and yet, there’s clearly quite a lot going on in this region.

On its website, the NT Writers’ Centre describes its goals:

The NT Writers Centre encourages vibrant literary activity in the Northern Territory, developing and supporting writers in all genres at all stages of their careers. We value quality NT writing as a unique component of Australia’s literary wealth and recognise Indigenous writers and storytellers as a core component of this.

Its main activities are:

This year the Festival was held in Alice Springs, in May. Its theme was Crossings/Iwerre-atherre (with Iwerre-atherre being an Arrernte, word for “two roads meeting, neither blocking nor erasing the other; two-way learning or travelling together.” Speakers included Kim Mahood and Bruce Pascoe (both of whom I’ve reviewed on my blog), plus many indigenous and other writers (including Indonesian writer, Agustinus Wibowo.) A lovely diverse line-up. 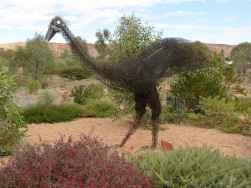 This year they also, for the first time, shared festival sessions via live streaming to “libraries and other venues across the NT.” A great initiative, but I wonder how successful this was – technologically, I mean.

Many of the events were held in the gorgeous Olive Pink Botanic Garden, which I’ve visited a couple of times. One event, for example, was titled “Up with the Birds: Poetry readings at the café”. I reckon I could have made that, as it wasn’t too early at 8am! The poets were Anthony Lawrence, Meg Mooney, Bruce Pascoe, Kaye Aldenhoven, and the poems were apparently about “how our feathered companions have crossed the hearts and minds of poets.”

Territory Read (and other literary prizes)

The Writers Centre supports or contributes to other literary competitions, including, for example, the Darwin Poetry Cup. In fact, from reading their site, and searching the ‘net, I sense that poetry is quite a going thing in the Territory. Australian Poetry, for example, supports (or, has supported) a Cafe Poet residency in the above-mentioned Olive Pink Botanic Garden.

The two residencies they offer are:

I was intrigued to note that, as well as work on their project, the writers from both residencies must “write a 500-word blog post for the NT Writers’ Centre website”.

Like all writers centres, the NT Writers’ Centre runs all sorts of workshops, and they are clearly aware that writers need to be skilled for contemporary consumers of literature. So, for example, one of this year’s workshops was on podcasting, and was run in conjunction with the 2017 Darwin Fringe Festival. The end result was Podcasts from the Fringe.

Another upcoming workshop uses modern technology to reach writers, which is probably particularly important in such a relatively large but sparsely populated state. It’s an online writing group, which will run for three months from September 2017. It’s for writers in all genres or forms, will provide feedback, and is about “drafting, reflection and constructive criticism in a structured and supportive online setting.”

I’ve enjoyed this little foray into another part of Australia and discovering what seems to be another vibrant literary environment … I hope you’ve enjoyed it too.